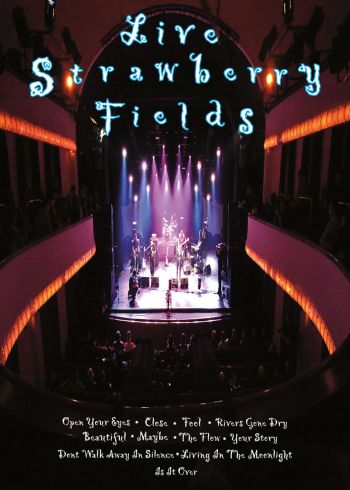 Strawberry Fields is a project band created by Polish drummer Wojtek Szadowski (Collage, Satellite) to showcase his modern pop writing and the sultry singing of Robin (Marta Kniewska). Their sole 2009 release, Rivers Gone Dry, is duly represented in this 2011 concert filmed at the usual venue in Katowice, Poland. Despite the one-off nature of the album, the band (including keyboard player Krzys Palczewski, guitarist Sarhan Kubeisi, bassist Jarek Michalski, and guitarist Michal Kirmuc) proves to be a cohesive and professional live unit. For example, Palczewski demonstrates the importance of layering and texture in what are otherwise simple pop rock arrangements (nothing resembling The Beatles), while Kubeisi exercises commendable taste and melodic sensibility in his lead work. The lighting and sound mix are excellent, though the editor’s love of quick cutting makes it hard to connect with the musicians. The cameras spend plenty of time on Robin, who is attractive enough in her black t-shirt and jeans rocker outfit. In fact, she has an almost conservative approach to stage singing, and doesn’t seem entirely comfortable fronting a band. She’s also a bit of a one-trick pony vocally with limited range and power. Fortunately, Szadowski has worked hard to ensure the arrangements play to her strengths, even the Satellite and Collage covers. The show is short, and the hour and 15 minute set goes by quickly, ending with an emotional dedication to beloved Polish promoter Tomek Dziubinski. It’s a somber way to end a gig, but one has to respect the sentiment.