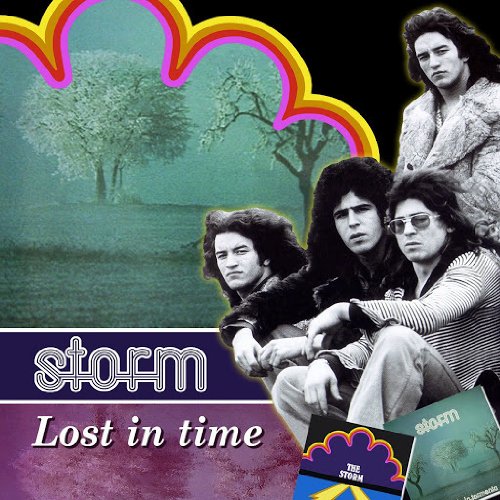 The Storm, or simply ‘Storm’ as they were billed on their second album, were a Spanish band formed at the end of the 60s by brothers Angel and Diego Ruiz (guitar and drums respectively) along with bassist José Torres and keyboardist/singer Luis Genil, originally Los Tormentos before changing their name to the English equivalent. This package reissues both of the band’s albums from ’74 and ’79. The Storm is a powerful debut, pulling together elements of hard rock and progressive with brilliant flourishes of psychedelic guitar, and the omnipresence of the mighty Hammond organ. Actually for 1974, this style is already a little dated, sounding more like Deep Purple, Uriah Heep, or Atomic Rooster of a few years earlier. Genil is no Ian Gillan, but he certainly makes up for it in effort, and the driving organ is perhaps the most defining element of their sound at this early juncture. The writing is very strong with catchy hard rock hooks, though curiously, all but one of the eight tracks is sung in English. The band even takes on some jazzy moves on “Crazy Machine,” one of the album’s more explorative tracks. This version of the band lasted until 1976, when they split temporarily due to national service commitments. Reconvening in 1978, with new bassist Pedro Garcia replacing Torres, they began work on their long-overdue second album El Dia de la Tormenta. This time out the lyrics are all in Spanish, and the style – rather than sounding backdated, is very current for its 1979 release date, and in fact recalls some other Spanish bands like Asfalto as they moved from their classic period into the approaching 80s. Sadly, that means most of that gritty Hammond organ that charmed the first album has been replaced by synthesizers, and a more dense production style prevails. Opener “Este Mundo” is quite strong and measures up, and the two-part instrumental “Saeta Ensayo” that ended the first side and concluded on the second side of the original LP is solid. Genil’s singing is even stronger than on the first album, but on a couple of the tracks the band seems to be moving in more commercial directions (pop sound). Sign of the times I guess. One caveat the prospective purchaser should know: the original master tapes couldn’t be found, and while the first album fares far better than the Lost Vinyl CD of about 20 years ago, the second album (its CD debut) clearly shows its vinyl origins, especially on the tracks with long fade-ins and fade-outs. But unless one is listening with headphones, that may not even be noticeable. That said, it’s good to have these available again.