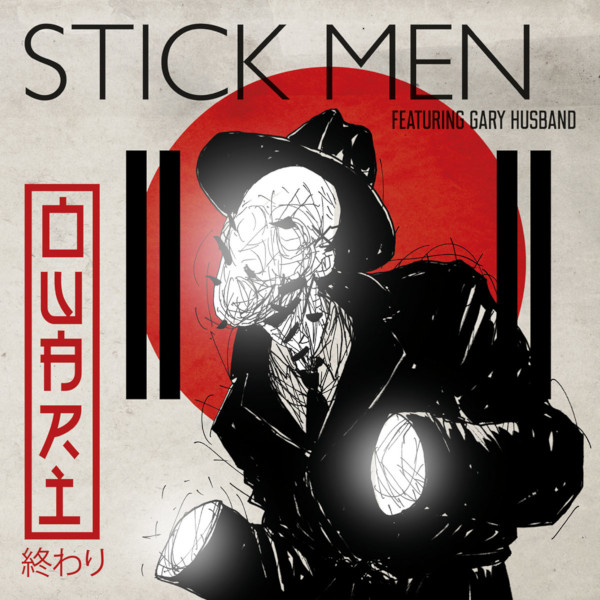 It’s been about six months since the last time I reviewed a Stick Men live album, so we’re due for another, in this case Owari, recorded in Japan with guest Gary Husband on keyboards. The documented show took place on February 28, 2020, at what was supposed to be the beginning of an Asian tour for the group, but upon arriving in Japan, they were confronted with the onset of the Coronavirus pandemic, and plans started falling apart; that show happened on the last night before the Japanese government shut down all public performances, and dates in Hong Kong and China evaporated. Confronted with the prospect of only one date remaining, Owari represents a kind of Plan B. Normally, with a combination of musicians who have only just started playing together and had only minimal rehearsal time, you would want to record a live album later in the tour when everyone has gotten used to the new configuration. Robbed of that opportunity, Tony Levin, Pat Mastelotto, Markus Reuter, and Gary Husband had to rely on their years of experience with the music (for the core trio) and a combination of raw talent and more-or-less theoretical discussions (in the case of Husband). Given minimal preparation, these four stepped onto a stage in Nagoya and presented an amazing evening of music. Husband’s keyboards don’t just fill out the sound — at times he doubles a melody with a synthesizer or electric piano type sound, and at other times he produces colorful washes of fascinating sounds, both chordal and chaotic. The setlist includes the usual Stick Men combination of tunes for their studio albums, King Crimson classics, and improvisations, and there are no weak moments. “Larks’ Tongues in Aspic, Part II” is outstanding with previously unexplored textures, and such Stick Men pieces as “Schattenhaft” are given energetic readings with extra special sauce courtesy of Husband. And the improvs are up to the usual high standards, with the added bonus of Husband’s keys. “Owari” is Japanese for “The End,” referring to the end of the tour, and Owari also stands as an impressive monument to the end of the band’s touring on Prog Noir, their last studio album, which dates from 2016. These extraordinary musicians have produced a truly impressive body of work, and it’s hard to imagine any other band touring four years without new studio material and keeping it interesting, but they’ve done it with flying colors. The end of one phase ushers in the beginning of the next phase, and there’s no reason to think it won’t be even better… Though Owari is going to be hard to top!