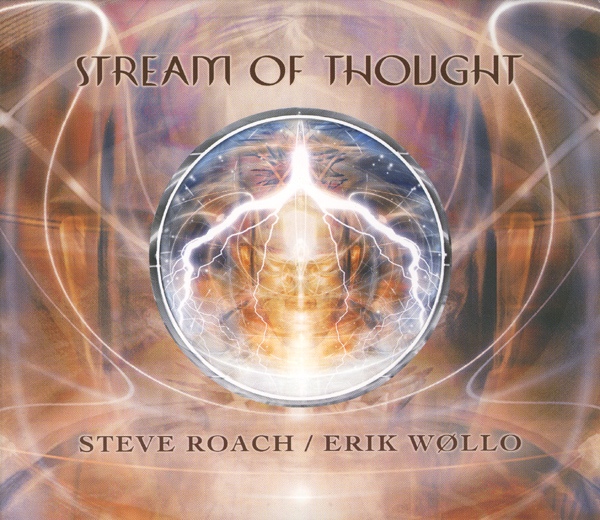 Roach should be well known to Exposé readers, and in fact Wøllo should as well – he’s a Norwegian guitarist who, at least these days almost always relies on elusive techniques that make his guitar sound like anything but a guitar. This long-distance collaboration is not as unlikely as it first seems, given both artists’ propensity for creating lush atmospherics by whatever means. And atmospheric this is: Stream of Thought is actually 19 tracks that run together nearly seamlessly creating over an hour of continuous sound, often drifting into deep space and areas beyond consciousness, but punctuated with regularity by sequenced passages – not rigid sequenced expanses like Schulze or Pinhas, but more subtle adventures blended with the nuances of deep-space drones and cloudy imagery floating within and behind the sequenced activity. The effect is like walking (or drifting) through a long corridor with side passages that take the listener in different directions for a while, but eventually return. There are even some brief splendid moments with “real” guitar (that is, unprocessed, un-synthesized), but it doesn’t come until later in the overall program. This – unlike many of the titles I have previously reviewed by Steve Roach alone and with various collaborators – is more of an “active listening” experience, though still quite relaxing and mentally soothing. Because of its varied approaches it seems a bit less suited for slumber. All taken, this is an excellent collaboration that might surprise the listener.