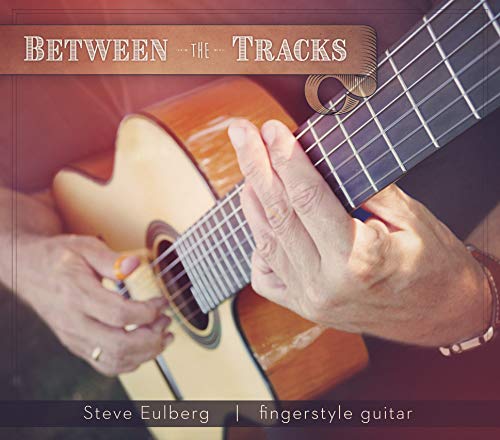 Steve Eulberg describes himself as a ‘traveling, performing, teaching musician’ in San Mateo, California, right across the bridge from where I called home for over thirty years in the San Francisco bay area, yet in all those years, with eight previous CD releases, I had never heard of him. He is proficient on a number of instruments, including piano, guitar, mandolin, didjeridoo, drums, dulcimer and more – basically anything with strings, plus he sings, composes, arranges, and is an ordained minister as well, a number of his previous releases consist of worship music that he has composed and published over the years. He also formed his own label Owl Mountain Music in 1991 to release his own music as well as other similar endeavors. The album at hand, Between the Tracks is his first release in a dozen years, and features no singing, instead being a compendium of his fingerstyle acoustic guitar compositions played in a number of styles including folk, jazz, blues, Latin, world, with a bit of classical in the mix as well. There is one cover tune of the Dan Fogelberg and Tim Weisberg duet “Guitar Etude No.3,” but all of the remaining twelve cuts are his own. He cites a number of influences in his liner notes, including Antonio Carlos Jobim, Mason Williams, John Denver, and Jim Croce (among many others) but when I listen to many of the tracks I am often reminded of the work of Leo Kottke and Jorma Kaukonen’s solo works on acoustic. That said, there are a number of standouts in this set, among them the cyclical “Eos” that works in a gentle way to calm the spirit. “Charlie’s Wrinkle” blends some Latin and world styles in a slow moving journey and is one of the few tunes here to utilize percussion (also played by Eulberg). Many of the pieces contain multiple guitar parts, backing and solo, recorded in multiple takes. “For Emily” is a beautiful solo piece that warms the heart, a piece written for the loss of a sibling’s infant and performed at the memorial. Every piece here has a back story, all documented in the comprehensive liner notes.