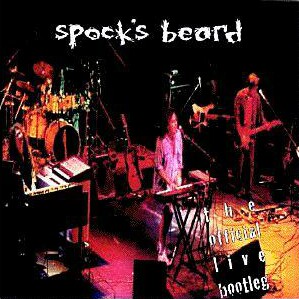 The Los Angeles ProgFests have proven their worth to the attendees and now they seem to be yielding rewards for the performers as well. While there was no ProgFest last year, 1996 turned out to be the year of the ProgFest live album with releases from Änglagård and Solaris. Now joining the ranks is The Official Live Bootleg from Spock's Beard. This disc captures Neal Morse and crew on stage at the Variety Arts Center, as they plow through their debut release, The Light, rounding out the collection with "Thoughts" from their sophomore effort Beware of Darkness.

For many in the audience, Spock's Beard's ProgFest performance was first contact with this new American band and, though Neal Morse was facing a somewhat hostile audience, he seems totally determined on this disc to win them over. Judging by the band's current popularity (including a repeat invitation to play ProgFest — an honor only previously accorded to Änglagård), for the most part he appears to have succeeded. No doubt this is aided by Morse's attention to detail which pays off on stage as it does on the CD; overall production values are high, with a good live ambiance added to a stellar board mix. And, regardless of how one might feel about the music of Spock's Beard, one can't help but feel that Morse is putting out 150% for the audience. The song "Thoughts" works especially well, giving the entire band a chance to show off their chops and ability to handle Gentle Giant-esque vocal interplay.

But, as much as I want to like Spock's Beard, I still have a nagging problem with them. Don't get me wrong, these are no slouches. The Official Live Bootleg proves that the group is more than capable of mastering long, complex arrangements full of twists in meter and dynamics. In fact, on this disc they make it look easy — perhaps a little too easy. I ultimately get the feeling that these guys could make a living playing just about anything they wanted and the performance (and their recordings, in my opinion) consequently lacks a bit of sincerity. Can a prog band be too professional for its own good? It's a question I think worth debating and The Official Live Bootleg provides a perfect case study.