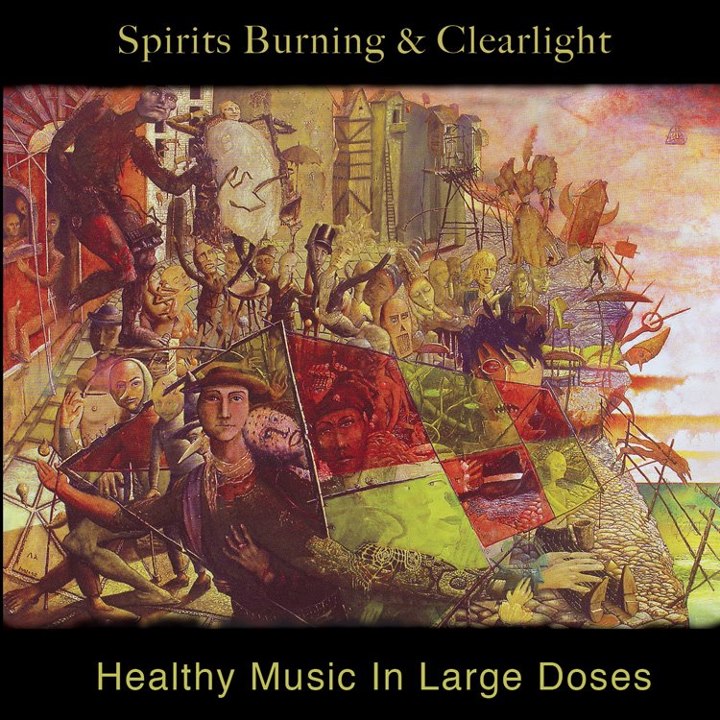 Spirits Burning is the ongoing project of Don Falcone and guests, many of whom appear regularly on most of the releases, including members and ex-members of various space rock bands far and wide, including Hawkwind, High Tide, Gong, The Moor, Universal Totem Orchestra, and many more (too many to enumerate here, it would take up the entire review) as well as members of other past and present bands and projects that Falcone has been involved with, offering wide variety of instrumentation. Clearlight is of course keyboardist Cyrille Verdeaux, who contributes to nearly every track here. The way Spirits Burning works is that the music is passed around to the various participants (many over long distances) where each player contributes their parts, and then when all are done, Falcone edits and mixes the results into what finally gets released. There are a lot of cooks in this kitchen. The result is a potent blend of ideas from a large number of composers and players that can pretty much go anywhere, with elements of rock, jazz, psychedelic, symphonic prog, folk, and electronic music all surfacing at various times across the thirteen tracks presented here. This time out several of the tracks feature vocals and spoken parts (some in French, courtesy Verdeaux) and the overall program leans in more symphonic and jazzy directions than the heady psychedelia and space rock of some of the earlier Spirits Burning releases. The music has a high density factor, and although a casual listen on speakers will provide a good experience, only a close listen on quality headphones will reveal all the layers of sound and detail that have gone into each of these cuts. Much herein to recommend.