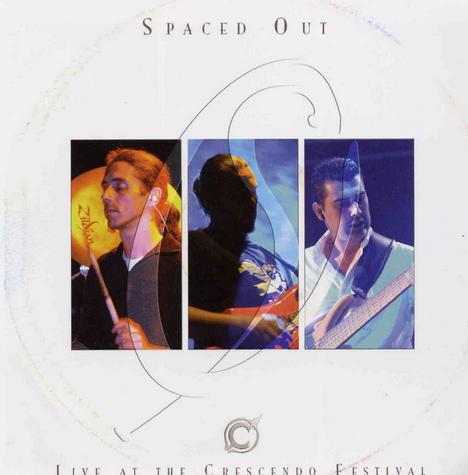 Typically, the first thing that comes to mind when one hears the name Spaced Out is the superhuman bass playing of Antoine Fafard. Make no mistake, band mates Mark Tremblay (guitar) and Martin Maheux (drums) are no slouches either, but Fafard exists in a rarified plane of ability among bassists drawing comparisons to such names as Les Claypool and Victor Wooten. This DVD presents an entire Spaced Out concert from the 2006 Crescendo Festival in France, and to actually see Fafard, Tremblay and Maheax play live further cements their reputation, though it’s also a bit like seeing the man behind the curtain. It makes the band more human and reveals how they translate their studio recordings to the stage. Part of this is through healthy doses of pre-recorded backing tapes, including keyboard and percussion parts that are no doubt fed into the PA as well as the band’s in-ear monitors. This requires a slavish need to stay in sync with the backing tracks in terms of tempo and dynamics and so what you get on stage is a very close rendition of the album songs. Consequently, Spaced Out can seem a bit clinical live as they chew through aural scenery. If you want three guys with insane fusion and rock chops, look no further, though if you want an engaging performance where musicians bond with their audience you may want to search elsewhere. Still, for sheer instrumental wizardry and a clinic in bass playing I heartily recommend this DVD.