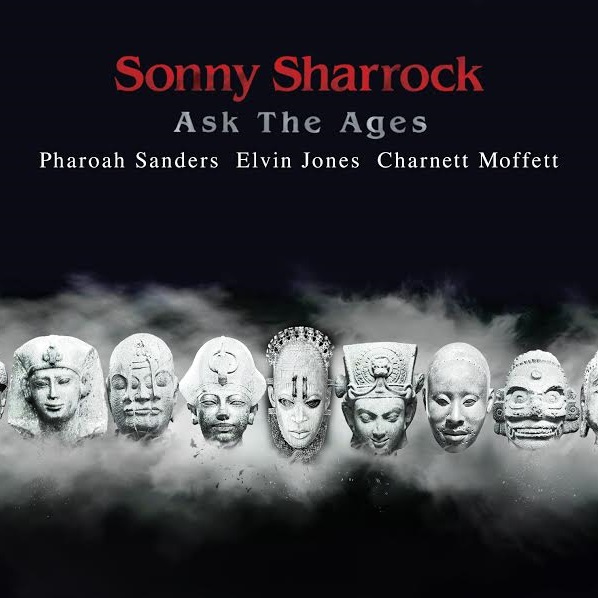 Sonny Sharrock’s 1991 album Ask the Ages: 1) Is one of the greatest jazz guitar albums of all time; 2) Is one of the best jazz albums of the 90s; 3) Is a compelling balance between composition and improvisation; 4) Has been out of print far too long. I could probably carry on in that vein for quite some time, but the point is that this is an extraordinary album and having it widely available again is a very good thing. So for all of you who enjoy things like Raoul Björkenheim’s recent releases – the kind of jazz that’s highly improvised but not completely free and isn’t afraid of what an electric guitar can do – bump this to the top of your “must have” list. With a career that began in the late 60s and ended with his death in 1994, Sharrock’s recorded output is much smaller than it should be, with only a handful of albums under his own name; his credits as a sideman are more extensive, including sessions with Herbie Mann, Wayne Shorter, Roy Ayers, Don Cherry, Pharoah Sanders, and others, basically the cream of the avant side of jazz, but still slight considering what a unique vision he had. With the quartet captured on Ask the Ages, featuring Elvin Jones on drums, Pharoah Sanders on saxophones, and Charnett Moffett on upright bass, he realized the peak of his artistry, bringing together telepathic group improvisation with memorable compositions, all preserved by the straightforward production of Bill Laswell. Laswell wisely avoided his big bag of electronic tricks and just let the music speak for itself – several of the tracks feature overdubbed second guitar parts, but the vast majority of the sound is the unaugmented quartet. The opening track, “Promises Kept,” is perhaps the most conventional, with a quick melody in unison (more or less) on guitar and sax, and chordal (more or less) backing from bass and a second guitar part. After the head, they move into a series of solo sections in a quick post-bop tempo with something approaching a walking bass line. The opening theme is restated at the end, before dissolving into nothingness. “Who Does She Hope to Be?” is a lovely introspective piece, understated and melancholy, with Sharrock exhibiting masterful control of his overdriven guitar, producing a lovely tone with enough raggedness on the edges to avoid being too pretty. “Many Mansions” is interesting in that it is little more than a simple melody at its core, rather than a chord progression, and the solos happen over the repetitions of the melody. Sharrock is not the kind of jazz guitarist who is prone to rapid-fire scales and complex chords. In accordance with his background in 60s free jazz, his style is much looser, and he relies on inventive phrasing, distinctive chording, and distortion to build his style. I suppose Ask the Ages might not be the kind of thing for everyone, but in my book, it’s a towering achievement.