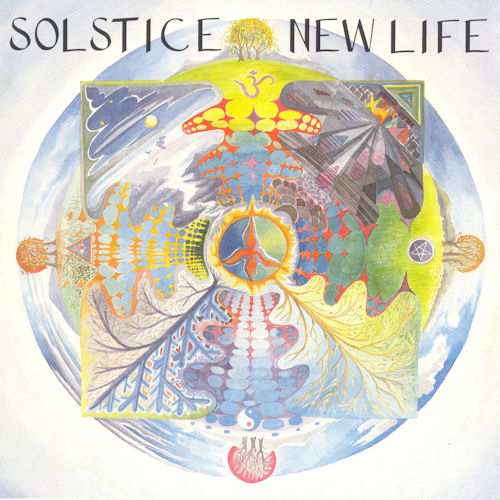 Throughout their career, Solstice has consistently eschewed the commercial interests shared by most other bands of the 80's UK scene, favoring instead to concentrate on live performances and a very intimate relationship with their fan base. Through the years the band has continued gigging regularly and writing new material, but it wasn't until the unexpected success of the reissue of their first album on an independent label that they even considered doing a second. In the nine years since the first album, the lineup has changed considerably - although core members Andy Glass (guitars) and Marc Elton (violin, keyboards) are still the guiding force in the band's sound. The most evident change is the departure of lead vocalist Sandy Leigh (with her quasi-Jon Anderson stylings) and subsequent replacement by Heidi Kemp, a stronger overall vocalist with a powerful delivery, more appropriate for Solstice's folk-tinged melodic rock sound, which draws influence from two bands not usually associated with the neo-progressive movement: It's A Beautiful Day and Renaissance; In fact Marc Elton's classical-meets-jazz violin style, the carefully crafted vocal harmonies, and the band's overall hippie ethic go far to fuel comparisons to David Laflamme and company on their original post summer-of-love classic - nowhere is this more evident than on "Guardian", a twelve minute excursion culminating in a ripping guitar solo by Glass, that might even remind some of Andy Latimer at his best. The band offers an obvious radio-ready cut in the title track, an uptempo number in standard pop-song format with a catchy refrain, but by no means a sell-out; it is sandwiched between two instrumentals "The Sea" and "Pathways", that give the band some stretching room. The closing track "The Journey" is another long epic, and takes the band as close as they get to the mid-period Renaissance sound - but just when you figure you know where this song is going, the drums and violin step in, change the tempo and take it into a whole new direction... The only downside is that for all of the violin and guitar soloing during the album's 45 minutes, one does hear variations on some of the same themes ported over from one track to another, especially on the instrumentals; a minor flaw, though, in light of the sheer power and style this album puts forth overall.