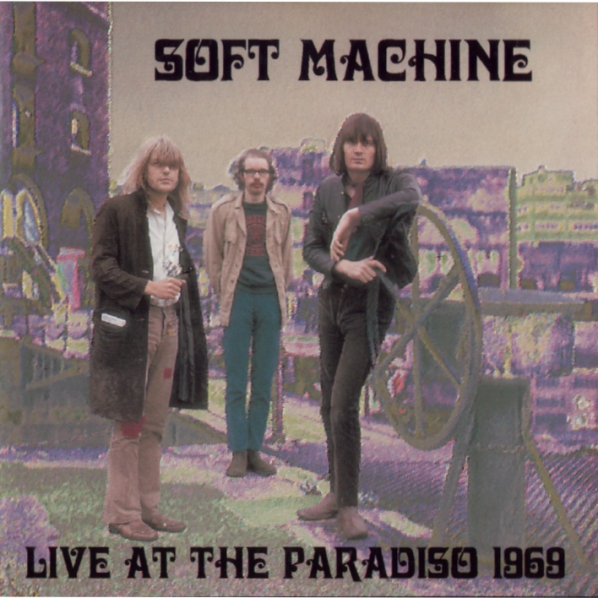 Oh yeah! More gold mined from the Soft Machine treasure troves! Softs re-releases are innumerable between the UK and USA in the past two years (and will continue to be through 1996), but somehow Voiceprint obtained the go-ahead approval to release this much-booted, nearly legendary live performance from 1969. Featured is the core album Volume Two line-up: Mike Ratledge (keyboards, primarily loud, obnoxious organ), Hugh Hopper (bass, primarily fuzz tone), and not-the-least infamous Robert Wyatt (drums, and off- miked vocal). This group seemed to be a semi-sedate, jazzy polished trio in the studio, but in a live setting they became a frenzied, frantic monster triumvirate which displayed high energy and versatile improvisation. Originally recorded as a potential official live album recording in Amsterdam, Holland (as clarified by Hopper in the new liner notes), the band had problems accepting the performance quality (after the fact) and vetoed release. For shame! However, the live tapes mysteriously 'slipped out' into the desperate hands of those greasy, grimey little bootleggers who scour the face of the earth looking for that ultimate rare live performance of note (such are yours truly, of course). And guess what? They found one that was actually inspirational and sounded fucking great to boot (pardoning the pun of course)! I remember first hearing this on a CD boot from 1988 and being awestruck as to the great band interplay and force these guys put out: like a jazzier ELP (Tarkus period), predating Egg's core sound by one year. This Soft Machine was a group who were loud! evidenced by the set included herein: several small tunes which comprise the bulk of Soft Machine Volume Two, but played at break-neck pace. Wyatt's somewhat disoriented vocal can be heard opening the disk, singing over booming bass and grinding organ. These guys were tearing through their set like a freight train steaming down the track. Included are some great drum solos and trademark key/time changes which show off each player's tremendous individual talent. The thing that absolutely makes it for me is Ratledge's demon-like ragged, thrashy organ sound which really rips through the entire set. One of my choices for top ten re-releases of the 1995.