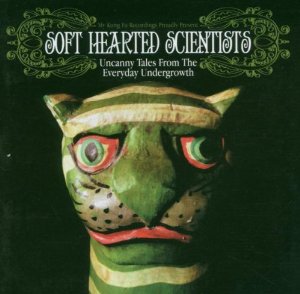 There is something endearing about the Soft Hearted Scientists, be it their name, their label name, their vocal harmonies, their whimsical songs, their catchy melodies, etc. I’ve been a fan ever since my first exposure to them via Fruits de Mer. Uncanny Tales from the Everyday Undergrowth is the tenth anniversary reissue of their debut album. Five of the twelve songs on the album were rereleased in 2013 on FdM’s massive vinyl set Whatever Happened to the Soft Hearted Scientists (“Mount Palomar,” “Wendigo,” “Brother Sister,” “The Yongy Bongy Bo,” and “At Night the Quarry Glows Like a Mothership”). All twelve songs on Uncanny Tales from the Everyday Undergrowth are psychedelic pop visions of Victorian fantasies. These are not the sword and sorcery themes we find in Death Metal, but instead gentle leitmotifs suggesting ideas from authors like Jules Verne, Lewis Carroll, William Morris, and Lord Dunsany. The songs are well constructed, arranged, and performed with just the right blend of acoustic instruments and subtle electronics. And to make this anniversary reissue a bit more special, there is a second CD of demos arranged in the same order as the album, so the bonus CD could be viewed as a complete demo of the original album. The songs on the demo disc are a bit raw, warts and all, but they capture the evolution from early versions to the finished product. If you have not yet experienced the Soft Hearted Scientist, this reissue is an excellent place to immerse yourself in this Welsh band’s unique musical view.