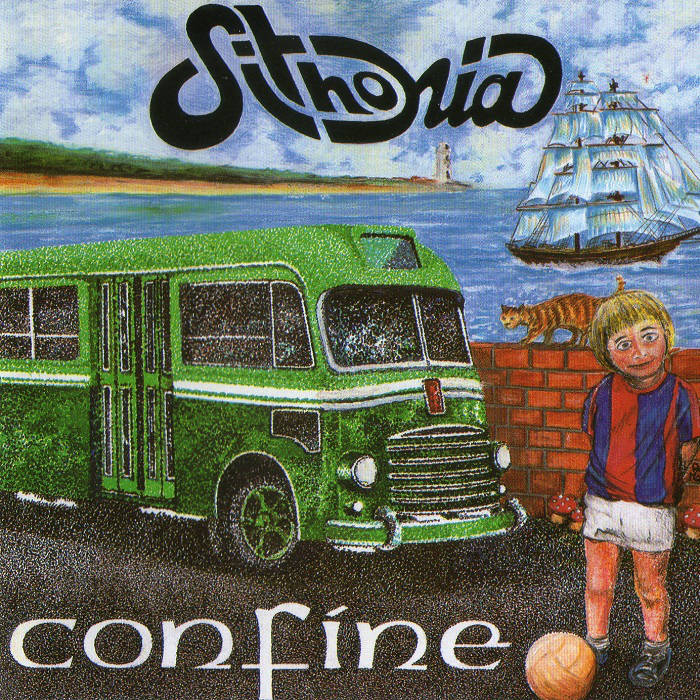 Sithonia certainly stand apart from their neo-prog contemporaries. Their influence draws mainly not on Genesis, but on classic 70s bands from their native Italy like Metamorfosi and Biglietto per l'Inferno. That, coupled with the fact that they sing in their native Italian, makes Sithonia sound less like a new band than like an old band that never broke up, just updated their style and got some new equipment. One thing that sets Sithonia apart from many neo-proggers is the use of acoustic keyboards (piano and accordion) and guitars in addition to the usual electric/digital equipment. These acoustic passages have a timeless quality – thanks also in part to Marco Giovannini's very Italian sounding voice – that many other bands with their high-tech assault seem to miss. Sithonia also seem to have a sense of humor (the Italian Grobschnitt), incorporating at various points in the album a wacky Moog melody, an artificial, wordless telephone conversation, and a 60s flashback featuring what appears to be a Farfisa combo organ! My only problem is with the guitarist's electric guitar tone: the same slightly distorted, slightly reverbed tone that's used by... oh, I don't know... just about every other neo-prog guitarist out there. Aside from that, a very enjoyable recording.

This fourth album by Sithonia, a modern Italian band, brings an up-front approach to their style, underlined by lots of chordal guitar work supported by keyboard pads, contrasting a bit from their previous studio offering, Spettacolo Annullato. This time around, and following the atmosphere found on their live CD Follia di Passaggio, the feeling is globally heavier although we find here and there more tranquil moments. The difference is also exemplified by the tendency to spring forth without notice from a smooth passage to a more consistent riffing. Mind you, heavy prog this ain't. But it's got a steady presence supported by a solid rhythm section. Following this more aggressive approach we find guitarist Roberto Magni (co-composer) in the forefront quite often and almost always in the background textures. The keyboard work of both Paolo Nannetti (also composer) and Oriano Dassaso range from bringing supporting atmospheres to rhythm assistance to up-front duets. This two-keyboard approach gives Sithonia an ample sound, but not overly complex. Since the material is mostly song-based (in the progressive sense) the keyboards are there for both texture and colorful sonic arrangements. The rhythm base of Valerio Roda (bass) and Orio Cennachi (drums) is driving everything safely home. This is an album that grows on the listener upon multiple listenings. It seems as if the music is not giving itself away on first listen. The feelings expressed, the musical essence unfolds themselves slowly but surely. The pieces are grouped under the theme of confinement, averaging about fiveminutes each. A lot of chord and rhythmic changes are found in each and although the basics appear as "songs" in the first place, there is room, within these boundaries, for musical explorations. In fact, despite their short duration, each piece gives the impression of being positively longer than they actually are, due to the many developments. Since the words seems so important to convey the conceptual feeling of the work, it'd have been nice to have a translation (maybe this could be a suggestion for a web page?). People who liked previous Sithonia offerings won't be disappointed at all as Confine extends in the same direction as before, while new listeners will find a music that has every prog element making it dynamic while retaining the essentials of the Italian approach: a heart-felt melody and rich arrangements.

Sithonia have actually been around quite a while. This I believe is their fourth album since they started roughly around the same time Nuova Era did. Sithonia are moving more and more into that classic 70s Italian sound while remaining tonally contemporary. It seems to me that with every album they make a small step in the right direction, streamlining their sound and focusing their better moments. Confine is certainly their best to date as it has some really tremendous themes and developments. My only gripes here are that at times some of the music seems like filler and that the playing can be somewhat amateur in the rhythm section department. On the other hand, they've decided to keep their lyrics Italian, which helps their already strong vocal department. There are a lot of good ideas here, some quite impressive and I think they've got about an 80 to 20 ratio of great music to filler. Confine is quite a good album and an addition to what is becoming an exponentially improving Italian scene. To be classed with Garden Wall, A Piedi Nudi, Deus Ex Machina and Finisterre as among the better Italian contemporaries.