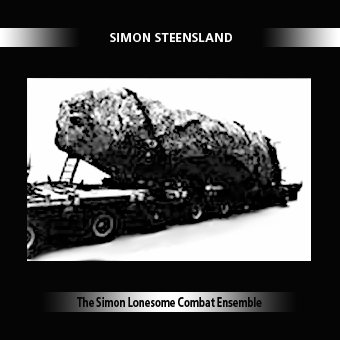 Cutting-edge, unpretentious and imaginative are three adjectives that describe this offering by Swedish multi-instrumentalist and composer Simon Steensland. Mixing elements of rock, neo-classical, jazz, some folk, and sensible sonic experimentation, Steensland has created a purely instrumental album of great depth and emotion, yet it maintains a sensibility of variety throughout - an album that would seem more at home on the Cuneiform label. Any general comparisons are not easy, as the music keeps taking different turns in many directions: on most tracks, Steensland plays percussion and keyboards, and mallets (or samples thereof), plus occasional cello, fuzzbass, accordion, berimbau, and other exotics. He is joined by a rotating guest list providing additional keyboards, guitar, bass, violin, cello and accordion. The album opens with "Mandrill," a high-tension track dominated by drums, synth and mallets, one that may recall the recent work of Daniel Denis. Then on to "Antischnurvewicklungsperre" — imagine Art Zoyd with a drummer, then throw a searing guitar solo on top of it all. Other standout tracks include "Nightingirl," where hard hitting fuzzbass and synth-bells paint a menacing zeuhl styled backdrop for a powerful and intense melodic buildup, leading to Morgan Ågren's 'electric chainsaw' solo, and "Doctor Locton," a mechanized orgy for offbeat percussion, electric bass, and synths. "Only in France" features a lonely Frippian guitar lead over dissonant accordion chords; "Alexandra," a solo piece for keyboards and marimba may remind of Kit Watkins' "Spring 1980." Some of the tracks here have a more programmed feel, akin to Thierry Zaboitzeff's Dr. Zab — two tracks in this category, "The Shadow of a Dog" and "The Hunchback's Dance," stand out with a dark, foreboding starkness that makes for some fairly challenging listening. Wisely, the more abstract material has been pushed out towards the last half of the disc. In all, this is excellent music that will appeal to the discriminating listener. If you are looking for the next Marillion, then Steensland's ensemble may not be for you.

This new release on Musea’s Parallele series is essentially a solo effort by Simon Steensland with a little help on guitar and keyboards from his friends Johan Boberg, Pelle Halvarsson, Joakim March, Herman Muntzing, Morgan Ågren, and Mats Öberg. Steensland plays drums, percussion, keyboards, bass, accordion, synths, berimbau, and flute to forge an intelligent blend of King Crimson, Heldon, and Magma with a dash of Frohmader. This is rich music full of complex chord and rhythm changes, dissonance, and virtuoso playing from the opening percussive fusion of "Mandrill" to the closing chamber music of "Could You... If I...?" Steensland’s compositional skills and musicianship are exemplary achieving a highly listenable yet intellectual suite of music. With a release of this caliber I find it difficult to name favorite passages, all are deserving of praise. The Simon Lonesome Combat Ensemble is a new high water mark in Post-Classical music, enriching a genre not explored enough today. If you have even a passing interest in the above mentioned musicians, I strongly recommend you buy this CD.