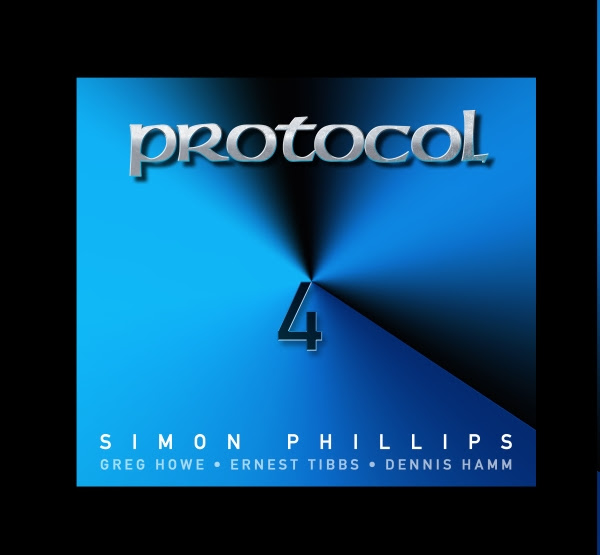 Coming of age as a music listener during the heyday of jazz-rock fusion, many of the classics of the genre made huge impressions on me that have lasted a lifetime. Mahavishnu Orchestra, Brand X, Return to Forever, Weather Report, and their peers are dear to my heart (though not without occasional reservations for certain releases). At its best, this stream of music brings together the sophisticated harmonies and melodies of jazz with the electric impact of rock. At its worst... well, let’s not talk about that. With Protocol 4, one of the most respected drummers in both jazz and rock has assembled a powerful statement that this vein still contains valuable ore. To my ear, these guys exemplify what it means to be seasoned pros without resting on their laurels. On guitar, there is Greg Howe, a veteran player with ten or so albums of his own along with dozens of appearances as a sideman. He’s skilled at funky blues licks, but equally good flying off into imaginative lead lines. His name may not come up in the standard lists of great jazz guitarists, but maybe it should. Keyboards are handled by Dennis Hamm, whose credits aren’t as extensive as Howe’s, but he proves his worthiness by his performance, which consists of excellent work on electric piano and synthesizer along with appropriate background work on other keyboards. He gets several ripping synthesizer solos that hearken back to the days when the Minimoog ruled. Bassist Ernest Tibbs has worked with Phillips on two of the previous Protocol albums as well as having played with Allan Holdsworth, and he’s superb at busy funk lines, fast riffs, and melodic leads. Phillips himself is of course stellar, proving once again that he’s a master of knowing what works, utilizing his large kit to provide a near-infinite variety of percussive sound, and showing great technical virtuosity without overpowering the music. I don’t suppose Protocol 4 will win many converts who dislike classic fusion, though it may entice some listeners unfamiliar with the style. It certainly has what it takes to please an old-time fan like me. This album is sure to be in the running for my favorite jazz albums of the year.

Orbit Service - Twilight – Here we are adrift in a sea of melancholy. Or maybe a better metaphor would be floating in orbit. There are lots of nice textures and rich sounds on this recording, the Denver band’s second, and...  (2005) » Read more