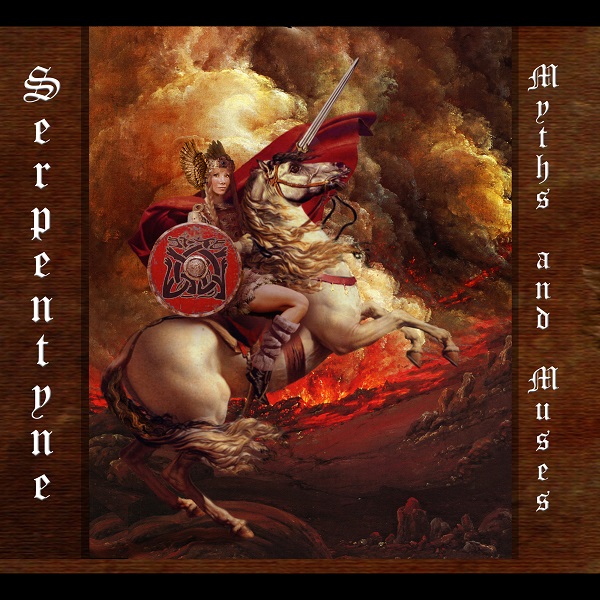 I really like this album and it may be my favorite 2015 release to date. Serpentyne is a breath of fresh air that leaves a smile on your face. Serpentyne is an energetic band that has combined medieval ballads of courtly love with rock and techno to extend what bands like Steeleye Span and Gryphon did in the 70s. Along the way they have also integrated elements from Hungary’s Vágtázó Halottkémek (Galloping Coroners) and Vágtázó Csodaszarvas (Galloping Wonder Stag). According to band leader Maggie-Beth Sand, she was particularly interested in writing and recording a set of songs about women warriors and other muses who have inspired men and women throughout history. There are a number of traditional songs and tunes with additional original lyrics and music. The opening song is “Boudicca,” an alternate spelling of Boadicea, the Celtic Queen who warred against the invading Romans. This song is medieval rock at its finest and a great way to open the album. The pounding beat, fifes, and tambourine give the music a martial atmosphere, but you also easily visualize maidens dancing in a circle with flowing ribbons. The next song, “Alexandria,” takes the listener to Egypt and Eastern melodies and arrangements that would not be out of place on any Loreena McKennitt release. The vocals are simply beautiful, the melody is catchy, and the lyrics just make you want to sing along. The third song, “Valkyries,” begins with a techno beat and vocal harmonies that evolve into Celtic rock of Northern Europe. A driving tribal beat takes over and the galloping horde rides over the hill. Song four is a Latin Christmas hymn from 1582, “Gaudete,” made famous by Steeleye Span on their Below the Salt album. Serpentyne transformed this song into more of a mantra, with drones, vocal harmonies, a capella lyrics, harmonic throat singing, and ending with high energy rock. Not at all what you would expect if you are familiar with Steeleye Span’s version! Next is “Hymn to Cynthia,” another energetic medieval inspired dance song with strings, flutes, fifes, and drum. Then we move to France for “Je Vivoire Liement” and then “Douce Dame Jolie,” two songs of courtly love seen through Serpentyne’s unique lens. Back in the late 70s with the rise of Renaissance Faires in the US, I came across an album by The Waverly Consort that included the 1377 dance hit “Douce Dame Jolie,” my favorite on the LP. Serpentyne’s addition of didgeridoo and rock music is a dramatic improvement! Track eight is the first instrumental on the album, “Freya’s Firedance.” The song title should key you in right away to expect another high energy swirling song. Next there is another cover of a Steeleye Span song from Below the Salt, “A Rosebud in June.” Serpentyne sings this song as a round for about the first three minutes and then they kick it into high gear with more Celtic rock. Song number ten is King Henry VIII’s top 100 hit “Pastyme with Good Company,” which was covered by Gryphon in 1973 on Gryphon and Jethro Tull as “King Henry’s Madrigal.” Serpentyne’s vision is a combination of a driving beat, electric guitar, and brass. All that I can say is wow! The album closes with another medieval rock tune “Les Garçons de Montagne,” with hurdy gurdy, drones, wordless female vocals, fifes, and drums. And if you haven’t gathered it by now, I strongly recommend this release!