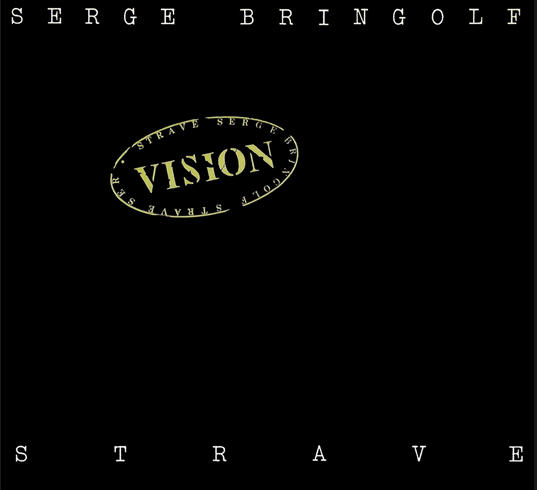 While there was only a year between Bringolf's first double LP Strave, and its follow up, the single LP Vision, the lineup changes were extensive – in fact only singer Mano Kuhn, a brass and a sax player, and Bringolf himself (drums, percussion, voice, and composer) remained from the original ten-piece lineup. Five new players were brought in to fatten up the sound to roughly its original contour, with some slight changes. Among the new players are Alain Eckert (originally from Art Zoyd, but at the time playing with his own quartet) and bassist Alain Lecointe (also from Eckert's group), and second bassist Claude Boussard. Unlike the debut, the new album did not feature flute or violin. Vision is more compact; unlike the first album which featured one long piece on each of its four sides, the second album features five cuts over two sides, two of which are only two minutes. The three remaining cuts range from eight to thirteen minutes, and offer a similar big-band jazz-rock style as the first, influenced by the earliest incarnations of Magma when brass and saxes ruled their sound, or perhaps the first album Z=7L by Zao (that mostly on count of the vocalizing); some apparent influence from Art Zoyd can also be heard, primarily on the cuts "Plus I" and "Plus II." The sound on this reissue is exceptional, mastered by the master Udi Koomran. No bonus tracks, but heck, with music this good who needs 'em.