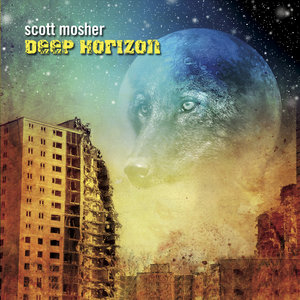 Progressive metal has been around long enough now that a new release has to have something different about it in order to catch my interest. Scott Mosher does a good job doing that with the first track of this album. Instead of the kind of keyboard playing you usually find in the genre, layers of synths lay down a background similar to Peter Gabriel's "San Jacinto." The rest of the track is more or less standard fare, but that little hook is enough, at least initially. In general, I find the guitar work to be acceptable — we're so used to this kind of playing that it's virtually impossible to make an impression — but the keyboard work strikes me as full of nice touches, providing sweeping ambiance rather than recycled Keith Emerson licks. There are also some bits of percolating sequences reminiscent of classic Tangerine Dream. Keyboards aside, much of it reminds me of Arjen Lucassen, both good points and bad, though Mosher is a little less over-the-top both musically and conceptually, therefore easier to take seriously. Singer Scott Olivia is good, with the kind of power and vibrato you expect in prog metal. Another surprise comes from the drums, as it's all programmed, but without reading the credits you might not notice. Well done on that, Mr. Mosher. Perhaps someone else has previously combined space rock with prog metal, but I haven't heard them, so it's fresh to these ears.