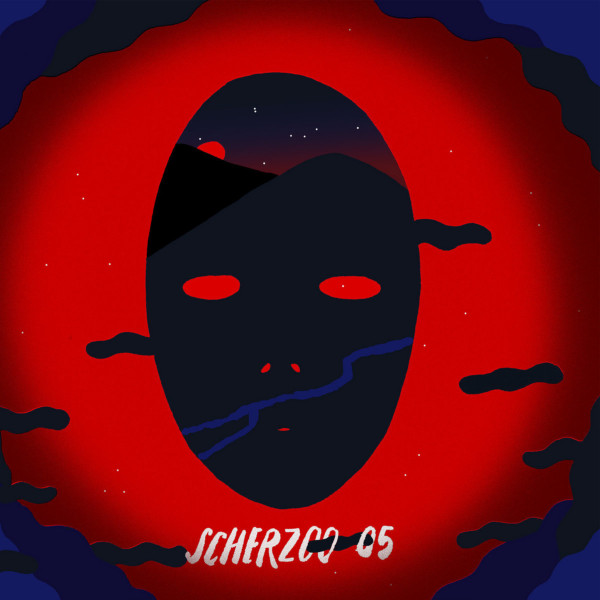 Multi-instrumentalist and composer François Thollot released two excellent instrumental albums in the early 2000s, Ceux d’en Face and Contact, both with a strong zeuhl flavor, playing all of the instruments himself. Realizing that in order to take his vision to the next level, he would need to form a band, and the resulting quintet became Scherzoo, their first release 01 appearing in 2011, a ferocious collection of six pieces with Thollot as composer and the group’s drummer, the other players handling guitar, saxes, piano, and bass. In the middle of album 03 (released in 2015) most of the band split, leaving Thollot to form a new band, with himself as bassist, drummer Clement Curaudeau, and new members on guitar and sax. By the next album 04 (2018) the guitarist and saxophone were gone, replaced by two keyboard players, Grégoire Planchet (electric piano, Mellotron) and Anthony Pontet (electric piano, organ), which is the same lineup as their latest album reviewed here, 05, with Pontet also taking on synths in his keyboard arsenal. One might imagine that with two keyboardists, no sax, and no guitar, that they sound a bit different from where they stared out nine years ago, and that would be a correct assumption, but at the core there are still many similarities, one of which is Thollot’s compositions, although of the album’s eight pieces, Planchet composed two of them. The electric piano and organ rave-up “Sunday Therapy” that opens the album is illustrative of the differences, a concise piece that puts some distance between their zeuhl origins and moves the band’s sound a little closer to electric jazz, avant-prog, or perhaps even an instrumental Canterbury style. All of the intensity is still there throughout, with Thollot and drummer Curaudeau making for a formidable rhythm section. The oddly titled “XZ/02” is a sterling example of Planchet’s composition style, slowly evolving and twisting over the track's near-nine minute duration. The most impressive piece here is the fourteen minute album closer “Tsunami,” a Thollot composition that cycles through a number of different powerful episodes throughout its duration, complete with a seemingly false ending and restart around the four-minute mark. This same lineup has been together for four years now, and one listen to 05 immediately tells you they are well on their way to fully realizing their new sound.