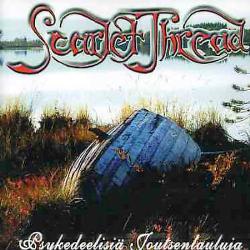 I know virtually nothing about Scarlet Thread other than the fact that they are Finnish and appear on the Kalevala epic collection. In spite of the first word of this album’s title, I would not describe them as being a psych band, more favoring a slightly symphonic progressive sound sometimes reminiscent of Genesis and Sinkadus, and sometimes a little like the quieter side of Ånglagärd. The all-instrumental pieces are well written and arranged, with varying sections and generally strong playing. In addition to guitar and keyboards, both violin and flute take lead roles, and there are some nice harmonic and countermelodic parts for the violin. All in all, it is quite pleasant stuff, though a few of the transitions between sections seem a little awkward, and I swear both violin and flute have some moments where intonation is problematic. In spite of the variety of instrumentation, the music is a bit thin at times, though improved production could probably fill out the sound easily. Still, much of the CD feels like backing music for some other lead voice or instrument that is missing. As a first effort, this shows much promise, and I don’t doubt Scarlet Thread can become something very interesting, especially given some good production and sensitive guidance.