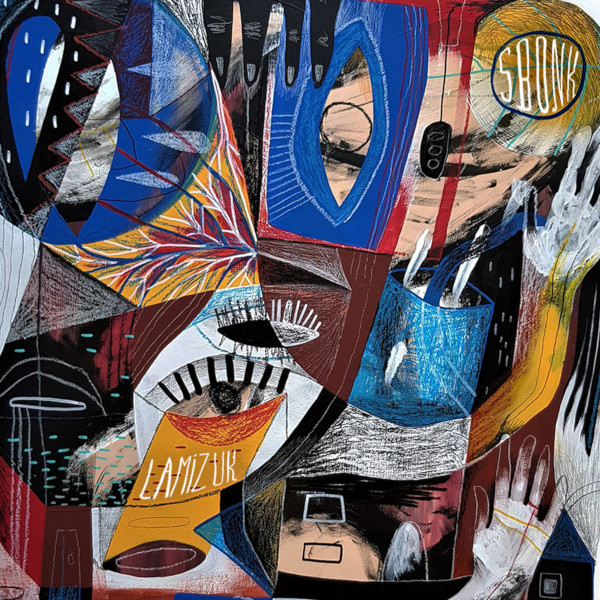 Fasten your seat belts, ladies and gentlemen. This trio from Bordeaux in southern France is going to take you on one wild ride that won’t be forgotten anytime soon. The three members are cloaked in a degree of anonymity, but there is a drummer, a bassist, and a guitarist, all great players, and no singer, which from my perspective is a good thing — initially I was afraid that this was going to be some insane group with vocals like Jack Dupon or Etron Fou, something where the listener needs to understand the lyrics in order to ‘get it,’ but that’s certainly not the case with these guys. There are some voice parts and spoken fragments and samples, and humor is imbued throughout their sound, but this is primarily an instrumental tour-de-force. The band had a couple EPs a few years back called Icozi and Goutch, but Lamizuk is the band’s first full length long player, and should be available on CD soon. OK, so you are asking what this sounds like, and one has to know that the nine tracks here are all a mash-up of complex and brutal rock styles, informed by metal, jazz-rock, funk-fusion, with a bit of psychedelic stoner rock in the cement mixer as well; the compositions are edgy and angular, and seem to be constantly on the change. The guitar is frequently subjugated to heavy and twisted effects, the bassist often plays fretless wobbly bass, and on the interlude “Le Soufflet Que le Bord” they even play an acoustic piano and treat it to a tunnel of stunning effects. The two-part “Buis de Nous” is anchored by a funky bass and drum figure while the guitar screams and shreds over the top of it all. The nine-minite opener “Debula” drives a hard complexity of angular funk with metallic shards flying everywhere. By contrast, the album closer, “Tonkatsu,” revels in an almost ambient guitar playfulness over a solid bass and drum figure until it gets to the two-and-a-half minute mark, then goes into a massive riff that would have been right at home on King Crimson’s Red, then after a few minutes it all collapses back into that dreamy ambient sound again. Beginning to end, this is an outstanding new release; one can take my word for it, or go to the link below and listen for yourself.