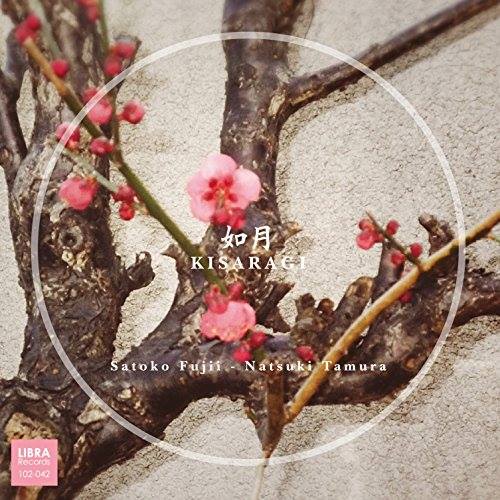 Satoko Fujii (piano) and Natsuki Tamura (trumpet) have made several albums as a duo before, but nothing quite like this one. The two are no strangers to free improvisation either, as their primary endeavors have focus in the jazz idiom. But with Kisaragi they have decided to create eight purely improvised tracks based entirely on extended techniques, or more simply put, nonstandard instrumental playing, such that the trumpet doesn’t sound like what one would normally expect from that instrument, and the piano is played from the inside out by strumming, plucking, scraping and bowing strings, and so on. The opening title track introduces the piano with some plucked bass strings and percussive effects, while the trumpet offers some painful squeaking sounds (I have no idea how he’s getting his trumpet to do that, but I guess that’s what makes it interesting) followed by some free wind chattering and flatulent sounds, while the piano goes forward creating some string-harp like sounds, before it all starts erupting into something akin to controlled chaos. Then it’s suddenly over and the next improvisation begins, and it’s something else, something new. Occasionally the duo flirts with melodies that just sort of appear out of nowhere, usually via some strange piano technique, but one can be reassured that whatever comes forth will sound nothing like what one would expect from the instrument. The trumpet is sometimes used as a vehicle for percussion, though more often Tamura is blowing through it, though somehow creating unusual sounds sounding more like animals screaming and squealing and the low vibrations similar to a didgeridoo. And then there’s the rubber ducky sound. Well, that’s what you have here, and while it’s very interesting beginning to end (mostly in deciphering how these varied sounds are made), it’s hardly that satisfying as music goes, with virtually no repitition, no rhythm, no melodic themes and variations; it was probably a lot more fun for the players to make than it for someone else to listen to. Still, the duo has to be commended for stepping this far out of their safe zone to create a full album like this.

Both Flamin' and Groovy