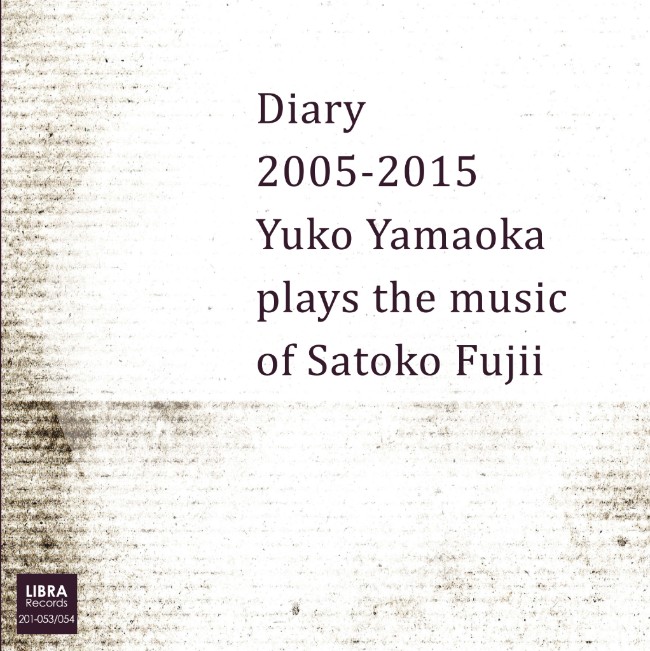 I’ve often wondered what is the maximum number of tracks that a sincle CD can accommodate. I remember that Dr. Nerve’s Beta 14 OK had around 16 regular tracks followed by 44 “Nerve Events,” each only a few seconds long, for a total of 60. Diary 2005-2015 is a two-disc set where the first disc has 62 cuts and the second has 56 — that’s 118 tracks total! But each disc is only about 42 minutes in length. Here, Fujii is the composer, while clasically trained pianist Yuko Yamaoka is the performer. The origin of each of the pieces here begins with Fujii’s practice routine during the period in question; each time she sits down at the piano, she begins by practicing composing for about fifteen minutes, something new each time, from short fragments of ideas that may only last fifteen seconds, to slightly longer pieces that approach the two-minute mark. Each one is titled numerically with the date of the composition, for example “030905” or “072712.” These short pieces encompass a lot of variety, some very abstract and difficult, others have a more rounded feel that piques the spirit and imagination, a few of them were even reused and developed into longer pieces that eventually appeared on her albums. “012707” evolved into “Tokyo Rush Hour” on her 2008 duet album with Natsuki Tamura, Chun. “052013” became the title track from the 2015 Orchestra Berlin album Ichigo Ichie. But most of the pieces just accumulated in notebooks on her piano top and in boxes nearby. Mostly these little compositional jewels represent the wide range of ideas that Fujii typically incorporates into her works. At the urging of her husband Tamura, she went through ten years worth of these compositions and selected the highlights among them, but ultimately found it too difficult to play all of the pieces exactly as written. This is where Yamaoka, a friend since her days at the New England Conservatory, comes into the picture; she has also performed on the New York Orchestra’s South Wind album; Fujii felt that her superior skill and phrasing as a player was what these miniatures needed. Yamaoka agreed to take on the project of recording all of these, and an amazing performance she has presented here, making them seem almost effortless. The result is something that a listener can appreciate on a number of levels, both as composition and performance.