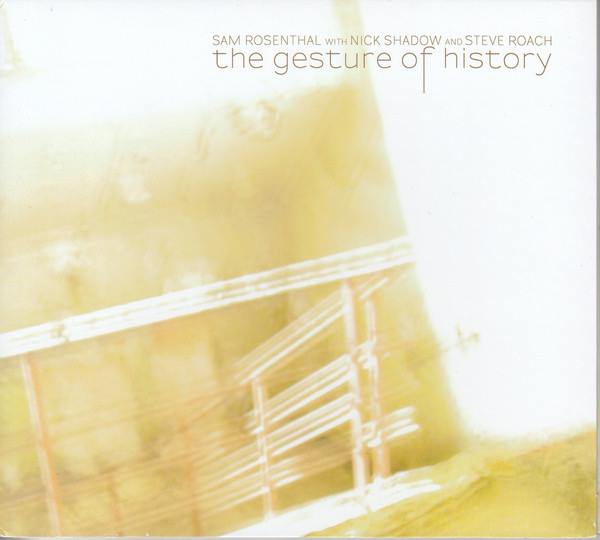 Sam Rosenthal is probably better known for his band Black Tape for a Blue Girl, who have been releasing albums since the mid-1980s, or his label Projekt Records specializing in gothic, neo-classical, floating ambient, and darkwave sounds, featuring a roster that includes Lycia, Unto Ashes, Erik Wøllo, Faith and Disease, Autumn’s Gray Solace, Steve Roach, Forrest Fang, and many others. Throughout the years he has released music under his own name, and ‘As Lonely as Dave Bowman,’ plus collaborations with Mark Seelig and VidnaObmana. The Gesture of History came to life via a crowdfunding campaign, but copies are still available as of this writing on Projekt’s Bandcamp page, and I would expect downloads to be available for a long time to come. The idea began with a track from Black Tape’s Blood on the Snow EP from 2017, featuring Nick Shadow, a Portland, Oregon based violist who has played on the last few Black Tape releases. The piece was expanded to two lengthy parts, and features additional processing and ‘special enhancement’ by Steve Roach, covering a total length of 25 minutes, expanding out into a beautiful shimmering panoramic soundfield, with Shadow’s viola being the only immediately recognizable instrument, enveloped in warm synth textures, occasionally rising up through the fabric to provide colorful dreamy melodics and intense highlights. The shorter track that follows “…and Watch the Galaxy Turning” was an idea seeded from the opening track on Black Tape’s To Touch the Milky Way album, and leads into the sixteen-plus minute title track, again another floating ambient epic featuring synthesizers, viola, and harmonium, the latter giving the sound a slightly darker texture, with the wandering viola snaking through the shimmering and ever-shifting continuum. In summary, the feeling throughout the four tracks offers a somewhat more restless and energized approach to the ambient electronic sound, and the viola in the mix is vaguely reminiscent of the early Bernard Xolotl releases with Daniel Kobialka. Haunting, beautiful and dreamlike.