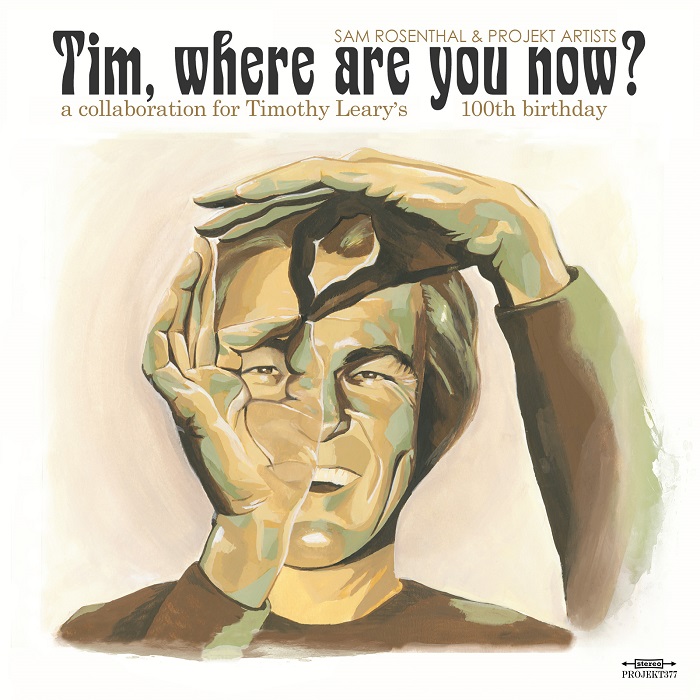 The album at hand is a tribute to Timothy Leary on what would have been his 100th birthday. A little background: In 1950, Leary earned his doctorate in clinical psychology at the University of California at Berkeley. After relocating to Italy with his two children for a period, in 1959 he started as a lecturer in clinical psychology at Harvard University and oversaw Harvard’s psilocybin project, the goal of the project being to analyze the effects of psychedelic drugs on human subjects (at a time when psilocybin and LSD were still legal). Leary and one of his associates were fired in 1963 after either giving psychedelics to undergraduate students, which went against policy, or missing too many scheduled lectures. For the next five years Leary and his associates continued their experiments via private funding. During that time word of Leary’s research hit the national press and by early 1966 much of America’s youth (and throughout the world, in fact) were experimenting with LSD, which was cheap and easy to produce. By the end of 1968 LSD became a controlled substance (illegal) and Leary was arrested numerous times for various drug offenses, in and out of prison, and in various other countries dodging the law. Leary will forever be remembered as the premier advocate of LSD and other psychedelic drugs in the early 60s, and remains a hero to many who came of age during that period. Leary died in 1996.

Tim, Where Are You Now? presents a collection of music produced by Projekt label head Sam Rosenthal collaborating with various artists from the label, including Forrest Fang, Steve Roach, Erik Wøllo, Mark Seelig, Jarguna, Mike Van Portfleet, Henrik Meierkord, Ryan Lum, Nathan Youngblood, theAdelaidean, and others. Several of the tracks (four to be exact) have superimposed on them Timothy Leary’s trip narrations, narrated by folks like Lee Renaldo, Reggie Watts, Alex Cox, Amber Case, and others. There are four bonus versions with alternate narrators included with the download version, plus four purely instrumental versions for folks like me who don’t want their music marred by narration. Simple reprogramming of the track order can get you whatever you want. Those extended floating ambient music sequences that occupy the tracks between the narrations (and comprise the bulk of what’s on the album) are what truly make the journey here wonderful, in fact as excellent as any of the other releases by the artists involved. A quick reference to the booklet notes will let the listener know who wrote which of the thirteen main pieces and who performed on them. It might also serve as a good introduction to this type of floating ambient music in general, a style that didn’t exist back in the early 60s when Leary was advocationg the use of psychedelics (synthesizers had barely been invented at that time and were silly sounding, primitive monophnic beasts), but somehow the music herein fits the concept even better than anything did at the time. Take the trip for yourself at the Bandcamp link below.