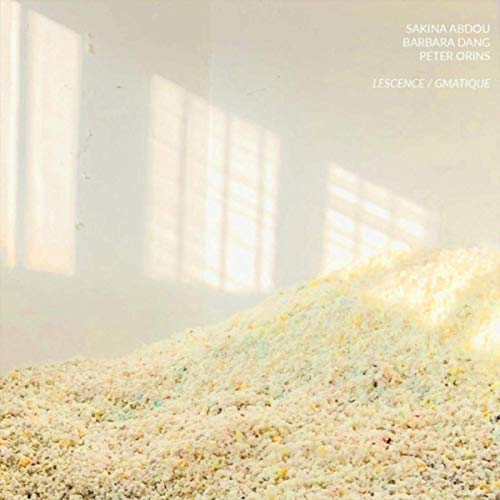 Nothing is what it seems to be. The trio at hand involves a saxophone, a piano, and some drums, and regardless of expectations based on those three instruments, it won’t prepare the listener for these two side-long tracks. There are sounds coming out of the piano every which way except how one would anticipate; same with the sax, there are some long notes, but percussive sounds as well, keys clicking, whatever, whistling sounds, feedback; the drums, well, what can I say, the rims are played, occasional brush sounds, I think the cymbals are being played with a bow as well. We are in improvised experimental territory, though nothing here is particularly abrasive or unnerving (okay, maybe the occasional screeches of feedback qualify), the two cuts clocking in at roughly seventeen minutes each are essentially ambient noise and sound sculptures, occasional bits of tonal color, and low frequency rumbling, all the sounds produced force the listener to ask the question “how are they doing that?” or one can not ask the question and just enjoy it for what it is. You might even forget that it’s on, seriously – it’s an interesting exercise in sonic expression, but not that memorable beyond the immediate moment. The three collaborators are members of the Lille based Muzzix collective, saxophonist Abdou is a member of Bi-Ki? whose work we have reviewed in these pages before, Orins is a jazz drummer involved in TOC, Circum Grand Orchestra, Satoko Fujii’s Orchestra and numerous other groups, all regulars in Exposé’s pages for many years; pianist Barbara Dang is a new name to me, though she is part of the Muzzix group and known for her experimental solo music. Overall, I enjoy it while it’s playing, but it is what it is, curious and interesting.