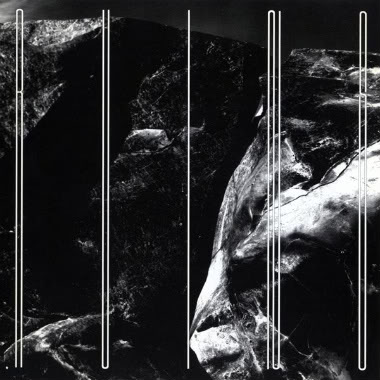 Ruins is a contemporary Japanese band that represents the harsh, aggressive side of zeuhl music. They are compared equally often with Magma and the hardcore band The Boredomes - that should give you an idea of the kind of crossover they pull off. After a pair of so-so noise-fest albums, Ruins really hit their stride in 1992 with the relentless album Burning Stone, full to the brim with impossible drumming and zeuhlogies by Tatsuya Yoshida, a note perfect disciple of Christian Vander. The only other member is five-string bassist Ryuichi Masuda, who manages a wide range of timbres. But the volume of this band would lead you to think this was a five piece - hardly a second is wasted in this kamikaze hurricane. Having blown a giant wad of catharsis on their previous album, Ruins wisely went for a marginally more subtle approach on this album. The title track, which begins the album, is always driving, but hypnotic and repetitive in a circular sort of way. Musical themes are grounded in Masuda's lead/rhythm work, and Yoshida's voice grumbles and shrieks (in their own fabricated language, no less!) as he works up a subtly nimble revolution on the drums. On the whole, Graviyaunosch lacks the urgency of Burning Stone, but for those who are turned off by hardcore-isms, this album may actually be preferable. The music is more dynamic, the rhythms more complex, and the range of sounds more evocative. But with the possible exception of the title track, none of these songs match the best of Burning Stone. I recommend Ruins to any zeuhl fan with a taste for punk, or any punk fan with a taste for prog. One cannot deny the power and complexity of their music, but as is the case with Magma, you either love 'em or you hate 'em. Not for the faint at heart.