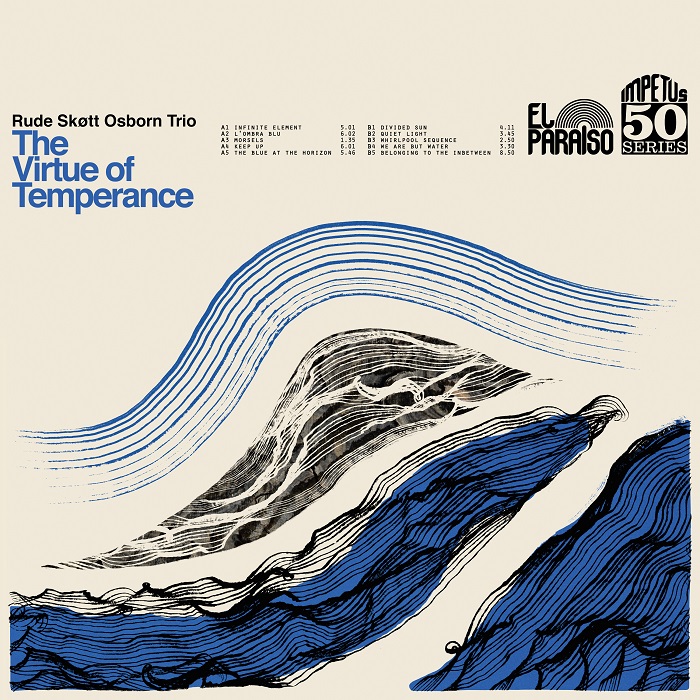 The Martin Rude & Jakob Skøtt Duo released two albums in 2020; Skøtt is of course the drummer of Causa Sui, and Rude is a multi-instrumentalist and main songwriter of Sun River, both on the Danish El Paraiso label. We reviewed the second of the two, The Dichotomy of Control, a while back. For their third collaboration, they have brought in a third player Tamar Osborn (saxes and alto flute) to join in the fun. Now one might suspect that with Skøtt’s background in Causa Sui (Rude plays bass with them sometimes as well) that this might be a heavy psychedelic rock experience, but like their earlier endeavors as a duo, the ten tracks here fit squarely into the acid jazz pocket, with Rude playing mostly acoustic double bass and occasional six string electric, Skøtt on drums, percussion and electronics, with Osborn being the final ingredient that makes The Virtue of Temperance very different from the previous two, although it began very much like those, Rude and Skøtt exploring ideas and improvisations in Jonas Munk’s studio in Denmark, keeping in mind to leave room for Osborn’s ideas — she is resident in England (where she is an in-demand session player) — so the recordings were shipped off to her to add her parts, although make no mistake, the results of the trio sound like they were all in the same studio recording together in real time. The results are at once gentle, psychedelic and brimming with magnificent grooves. Osborn treats the saxes and flute to effects like wah and space echo, as well as Rude with his guitar parts, while the electronics involved are never overpowering, but all nonetheless contribute to its psychedelic tendencies. Standout tracks include.the nine-minute closer “Belonging to the Inbetween” and the opener, “Infinite Element,” which offers a driving groove with powerful electronics and bari sax. “Quiet Light” pits echoey flute against improvisational guitar in a dreamy setting served well by Skøtt’s improvisational drumming, and “Divided Sun” captures an infectious groove giving Osborn free rein to layer saxes over it as the piece goes forward. All taken, The Virtue of Temperance offers a magical experience that a listener will want to repeat often.