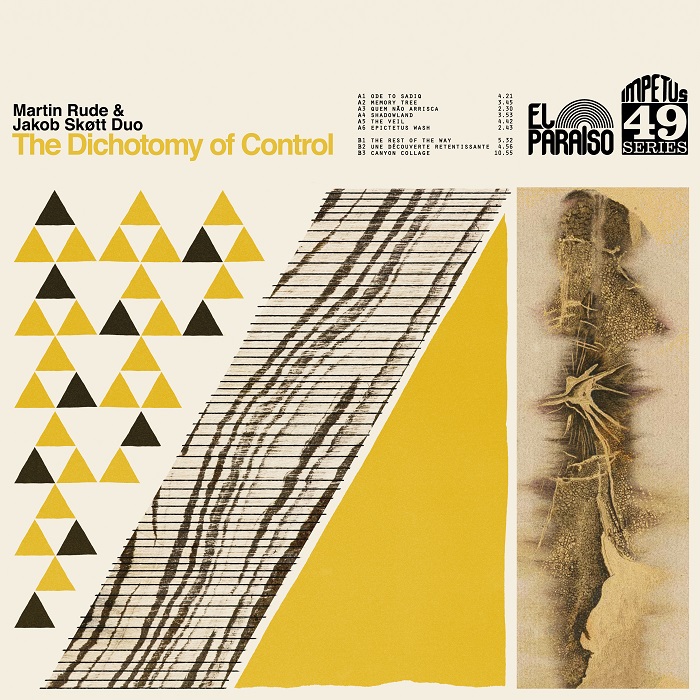 In 2012, multi-instrumentalist and singer Martin Rude, along with Jakob Skøtt and Jonas Munk of Causa Sui released the self-titled album by Sun River. In 2020, eight years later, Rude and Skøtt have formed a duo project, and released their debut LP, The Discipline of Assent, earlier this year. Now they are back with a second release for 2020 titled The Dichotomy of Control created from entirely new sessions from July of this year. For his part Rude plays double bass and guitars, while Skøtt contributes drums, percussion, electronics, samples and effects. With only the two players, their sound is unique but very much like what one would expect from a full band. “Ode to Sadiq” opens with a powerful drum and bass acid jazz groove with some wild electronics joining in the fun, kind of chaotic, somewhat angular and twisted, but a load of fun right up until its abrupt ending at a little over four minutes. “The Rest of the Way” finds a number of sweet grooves for bluesy guitar and drums with bold atmospherics of electronics and flute-like sounds, making for a delightful journey to its five-plus minute conclusion. Similarly, “Memory Tree” features the flute-like electrinics over a beautiful jangly guitar figure with drum riffing throughout. It’s hard to know how much of this is scored at some level and how much is the fruit of pure improvisation, though the organized melodic nature of it suggests the former, yet the jagged and random experimentalism of many of the passages seems like the product of pure improv. Regardless, it works well and keeps every piece interesting from beginning to end. The sprawling eleven minute closer “Canyon Collage” calls forth layers of eastern-style fingerpicked guitar while what sounds like vibraphone accompany the percussive tracks, the overall result is something quite psychedelic and mindbending. The Dichotomy of Control offers amazing surprises throughout its nine explorative tracks.