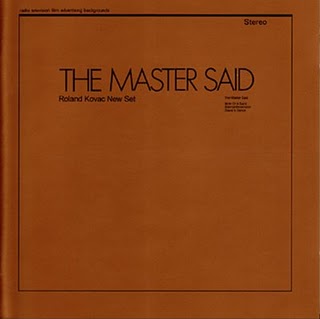 This band of "unknowns" was actually made up of well-known studio musicians, guitarist Siegfried Schwab from Et Cetera and Embryo, Swiss jazz drummer Charly Antolini, and bassist Franz Loffler. Kovac himself was an established classical/soundtrack composer. Though 44 at the time of this recording, he still looked every bit the ragged contemporary freak. Interestingly, the original purpose of the disc was to be played as background music at radio stations, and the disc was sent to stations throughout the world. I can picture the kind of stations that would have used this: hip FM stations, where the DJ would be stoned off his gourd speaking semi-coherently about anti-establishment sit-ins organized to protest the sexist compulsion of women having to cover their breasts, while the zoned listeners probably don't even realize that the DJ was not part of the music. The 17-minute opener is jamming and psychedelic with wild, swirling, echoey organ, over bluesy chord progressions mixed with meditative space outs. It's pretty predictable stoner music however; this may not be music to fire up a bone to so much as music to put down the clip and sit back to. The 10+ minute follow-up spends the first few minutes in free, organ-effects territory, hitting a nice bass groove with Kovac's swirling organ dancing madly over it, and finally taking the last few minutes to experiment. Track 3 is a short, Bach-inspired tune, and the closer is a short, loungy piece, serving as an end-of-night coda.