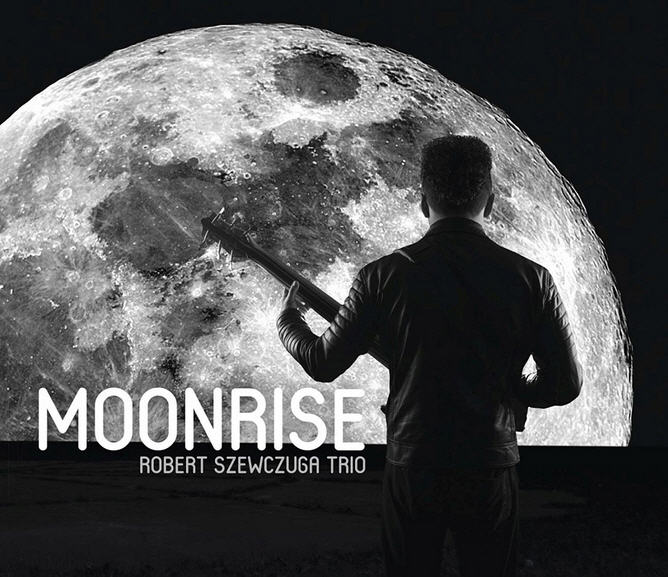 Never heard of Szewczuga before? This outstanding bassist is one of the most promising young jazzmen in Poland today, but to date he has spent most of his career as a sideman or session player, initially part of Polish jazz singer Beata Przybytek's Quintet, then in 2006 joining the Szy-szy Kaan Jazz Group, then the Golec uOrkiestra big band on their fifth album. He has also been a member of Apostolis Anthimos’ recording lineup on the 2008 album Miniatures as well as the latest album Parallel Worlds. Although it represents the culmination of several years of work with his trio featuring keyboardist Michal Rorat and drummer / percussionist Pawel Dobrowolski, Moonrise is the first album bearing Szewczuga’s name. There are numerous guests featured across the album’s eight tracks, including Anthimos’ playing guitar on one cut, violinist Krzysztof Maciejowski (who also plays in Golec uOrkiestra) is featured on the opening cut “Intro (Landing),” keyboardist Dawid Broszczakowski joins on a couple tracks, as well as two different singers on the album’s two vocal numbers. Normally I would start at the beginning, but here the closing track, “Trip + Outro,” featuring Ghostman’s vocal is so powerful that it warrants an exception, building up a powerful African rhythm from mbira and keys, with bass and additional percussion joining in for the remainder of this delicate and beautiful journey, it has to be one of the finest pieces on the entire disc. The album’s other vocal track, “The Middle of Nothing,” features an interesting laid-back soul groove with English lyrics delivered by singer Jarek Kruzolek. Earlier in the program, “13” has a distinct Pat Metheny feel seemingly inspired by his “Last Train Home,” with all of the crafty guitarwork handled by Szewczuga on his six string bass and Rorat offering some diversions and twists via electric piano over its nine minute duration. “New-Old” cranks up the funk machine, with some wild out Moog synth leads reminiscent of classic Herbie Hancock, shifting gears to a slower pace in the middle for some showy bass licks. More trippy funk grooves combine with a strong latin flavor in “Salseson,” with a memorable melody delivered on bass driving the proceedings, along with some crafty solo licks on electric piano. “Victoria” is another beautiful melodic piece that starts with a nod to Metheny, then shifts into a vehicle for some superb piano-driven solos. While Moonrise remains inside the broader boundaries of the jazz idiom, it’s a varied set that represents the wide range of interests that Szewczuga and his trio are pursuing. A great start.

Spock's Beard - Spock's Beard – Nine studio albums out and three since the big event that changed the band forever, Spock’s Beard today is a stronger entity than they have ever been before. Behind door number one is a modern...  (2007) » Read more