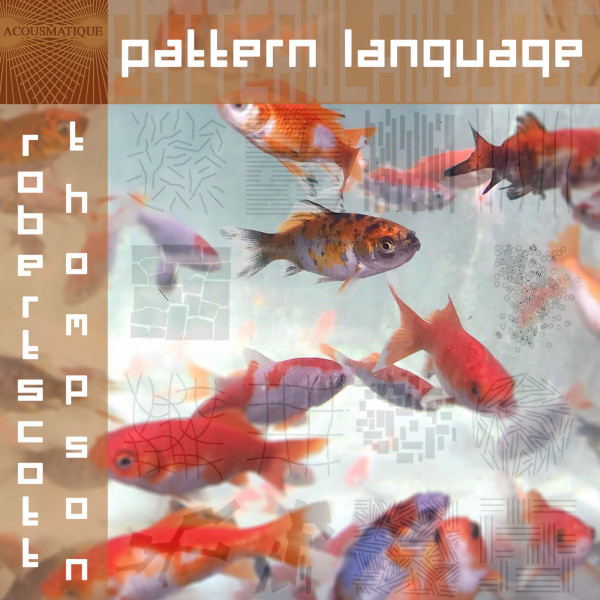 Brownian motion — any of various physical phenomena in which some quantity is constantly undergoing small, random fluctuations, much like watching a tank full of fish. Each individual particle or fish follows a pattern, but from a macroscopic view, everything appears to be random. Robert Scott Thompson’s Pattern Language is the musical equivalent of Brownian motion, 73 minutes of electroacoustic music divided into eight distinct parts that segue seamlessly. In each part the individual musical elements are constantly shifting, but give some shape to the part, Thompson takes natural and found sounds and extensively processes them so the source is unidentifiable, but the results are metallic clanging, bubbling electronics, sonic clashes, modulated voices, drones, etc. Some the of parts are amorphous while others have some structure. The constant ebb and flow of sounds has some sort of rhythm without repetitiveness, which maintains your attention through out the entire album. At times I was reminded of Popol Vuh’s Affenstunde or In den Gärten Pharaos. At other times Kubrick’s soundtracks to 2001: A Space Odyssey, especially Ligeti, or The Shining. Pattern Language is a very interesting album that will appeal to fans of avant-garde electronic and electroacoustic music.

Pentacle - Le Clef des Songes – This reissue is a long time coming for Musea, as this nifty piece of French history has only seen one Japanese LP reissue since its Arcane release in 1975 (that is barring a French reissue). This is...  (1995) » Read more