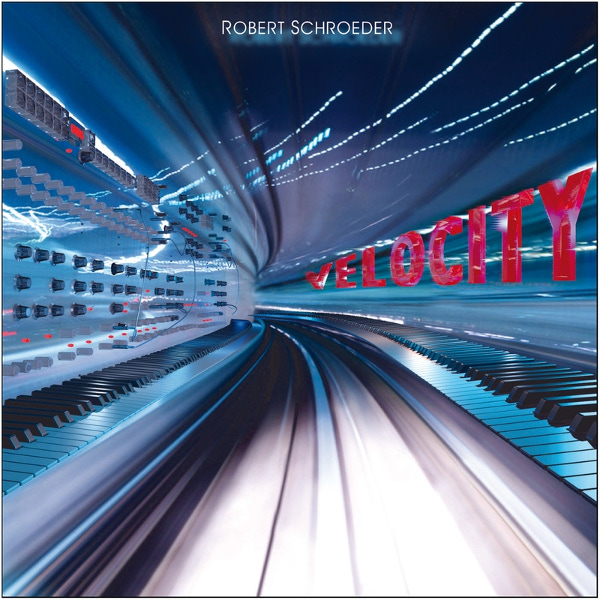 Robert Schroeder is no stranger to electronic music fans. He released his debut album, Harmonic Ascendant, in 1979 on Klaus Schulze’s IC label. 2017 marks the release of his 36th solo album, Velocity, as well as receiving Germany’s award for electronic music, the 2017 Schallwelle Award. Schroeder is a first class Berlin School electronic musician and composer. Of course, the seven instrumental tracks on Velocity are sequencer-based along with soothing washes of electronics, Mellotron, vocoder, and Klaus Schulzeian percussive rhythms. The album title refers to the velocity sensitivity of the keys on electronic instruments, the speed and duration of pressing a key. This pressure sensitivity provides powerful control over the sounds and music. In the early days of synth music, pressure sensitive keyboards and polyphonic synths did not exist, and listeners became very familiar with the sound of the Moog and other monophonic synths. Polyphonic and pressure sensitive synths have been with us now for decades, and we have become so used to hearing these dynamics that I found it difficult to understand Schroeder’s approach to exploring these dynamics on Velocity. Suffice it to say that Velocity is a delight for Berlin School fans. The music is abstract, ambient, floating, flowing, cyclic, etc. And the track titles refer to the different types of dynamic controls available to the electronic musician: “Velocity of Flow,” “Strength of Pressure,” “Xpress Yourself,” “Aftertouch,” “Velocity,” and “Ribbon Control.” And the final track, "Psychedelic," embodies everything. But don’t try to correlate the titles with what you might expect to hear, just sit back and enjoy the music for what it is.