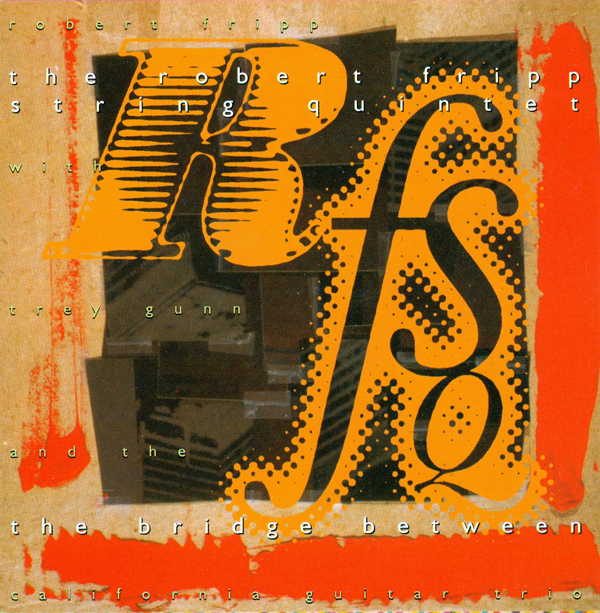 Robert Fripp's latest release, The Bridge Between, is credited to 'The Robert Fripp String Quartet,' comprised of Fripp, Trey Gunn on Stick, and The California Guitar Trio. The album is a sophisticated entertainment, consisting of live performances with some unspecified overdubs ("to give a thicker texture than was possible live" says the co-producer David Singleton in the liner notes). This is also a fun album that covers a lot of musical territory. Part of the fun for me was trying to figure out who does what in the music, that is, what instrument is making what sound. The pieces are highly arranged, this is no loose blowing session. The arrangements are generally interesting; in the speedier numbers the CGT usually act as a rhythm section by the use of short cyclic riffs using pitch intervals typical of Red-era King Crimson. Gunn supplies keyboard/synth/Mellotron-like washes of tone color, and Fripp solos above all this. The result, on songs like the opener "Kan-Non Power" is an energetic cousin to classic aggressive late Crimson. Very nice. The connection to Red-era KC is made explicit in the piece "Blue" (get it?), with Fripp reprising his justly-lauded "Starless" guitar solo in a duo with Gunn's synth washes (what the song credits call a "soundscape"). Sometimes, as in "Blockhead," by Paul Richards of the CGT, Gunn's Stick plays a bass part as well as supplying harmonic material. The album has a varied pacing. Gunn supplies a solo performance of Bach's "Chromatic Fantasy" and the CGT supply a version of Bach's "Contrapuntus" and a Bach "Passacaglia". The CGT's Bach performances, to my ears, sound almost exactly like a harpsichord performance, with their plucked taut steel guitar strings imitating a harpsichord's plucked strings. These pieces serve to add variety and break up what could be an unmitigated Fripp-fest. The composing credits on the album are pretty much an even split between Fripp, Gunn, members of the CGT, and Bach. The big statement of the album seems to be the final number, "Threnody for Souls in Torment," written by Fripp and Gunn. This almost-thirteen-minutes-long album-closer features tons of atmosphere at a slow tempo. One could call it "Ambient Music for Souls in Torment." While a credible effort and interesting enough on its own terms, I enjoy the shorter, more animated pieces preceding it. To summarize, this album is essential for Fripp fans, and is much more accessible and unified than Fripp's last few efforts. It contains a lot of material which will appeal to listeners who may have enjoyed Red-era KC but have not been so thrilled by his Frippertronics / League of Gentlemen / Crafty Guitarists work.