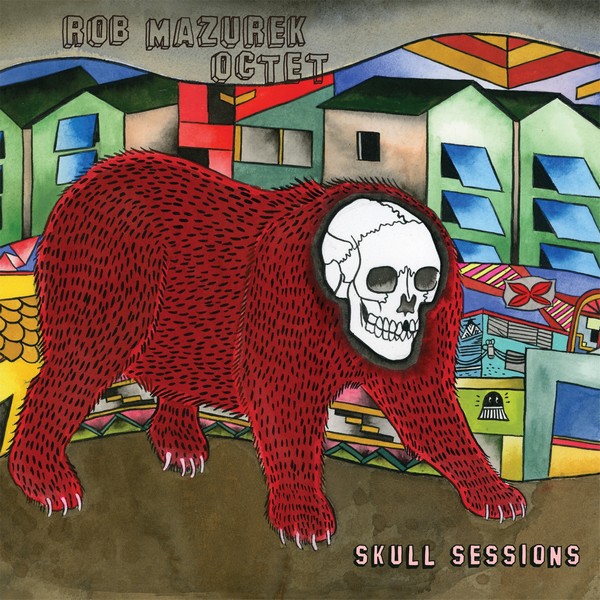 When I first listened to Skull Sessions' mixture of avant-jazz and electronics, I was reminded of George Russell's Electronic Sonata for Souls Loved by Nature, especially the 1968 version. So I went back to that album and refreshed my memory. By comparison, Skull Sessions (in spite of the fact that all but one of the tracks are over 13 minutes in length) sounds condensed. Electronic Sonata sprawls more, with its two 25+ minute parts, becoming almost ambient at times; Skull Sessions has fewer moments like that, though it's far from constant blasting. Mazurek's octet here consists of the leader on cornet and ring modulator (a big contributor to the retro-electronic feel); piccolo, flute, and female voice; drums; vibraphone; cavaquinho (a small guitar-like instrument) and percussion; keyboards and electronics; rabeca (a folk violin) and sax; and guitar and electronics - note the lack of a bass. Mazurek's composistions seem fairly loosely defined, with lots of room for expression and improvisation, and the players do an excellent job of not overcrowding the sound. During the improvised sections, even though it's rarely clear that anyone has a "solo," it's also not a complete free-for-all. Like good jazz players, they express themselves in such a way as to not overshadow the collective spirit, listening to each other and contributing to the success of the tune. There are some wonderful stretches where the drums and percussion groove along nicely and the other instruments slot together improvised phrases, not quite trading off, but not stepping on each other either. The intensity gradually builds up to a frenzy, which signals a change of some kind. This is really great stuff, supremely well crafted and executed, and a great entry into the ranks of adventurous jazz.