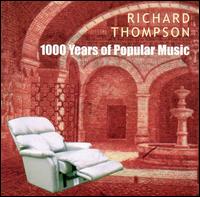 When the end of the millennium started creeping up, lots of people started making lists. When it comes to the subject of popular music, most of us are only familiar with that of the 20th Century, with little idea even what constituted “popular music” in 1350, for example. As the story goes, Playboy asked a bunch of musos for their end-of-the-millennium lists, and, knowing well that they really meant only the last 100 of the 1000 years, Richard Thompson took them at their word and dug back into the beginnings of music as we know it. After compiling the list, he decided it would make a nice show, and this live recording, in addition to documenting the history of Western popular music, is testament to the the man’s broad knowledge and good taste. Aside from the occasional presence of Judith Owen’s voice or Michael Jerome’s percussion, it’s solo Thompson, full of the wry humor and stellar guitar playing for which he’s known. You can take as given that the quality of the performance is high, so the choice of material becomes the defining factor – Thompson manages to represent most of the ten centuries, from “Summer Is Icumen In” (documented in the 13th Century and likely much older) to “Oops! I Did It Again” from the waning days of the 20th. Songs in English (of whatever century) dominate, from folk to music hall to jazz to rock and roll to rhythm and blues to “disposable” pop. I’m now waiting for Volume Two...