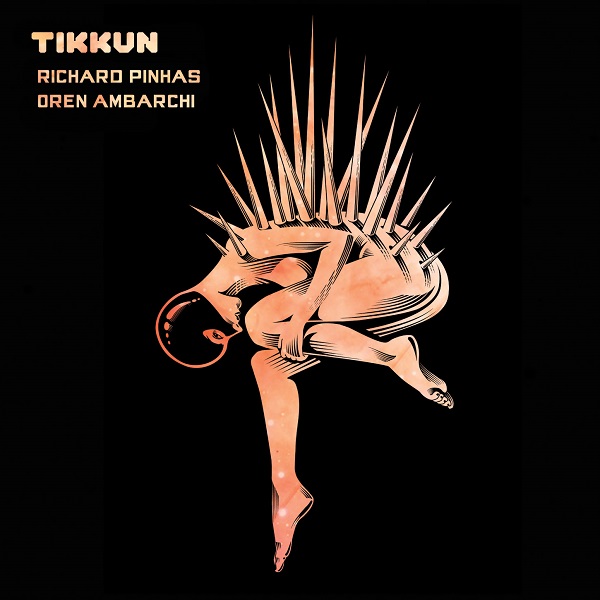 If an album cover ever fit the music perfectly, this is it. The sound of these two adventurous masters weaving dense interleaving ambient sonic fabrics, at once abrasive and beautiful, morphing slowly as they go, is like a collision between spiritual release and the essence of a nightmare, not at all unlike a mental massage that’s as suitable for intense personal listening as it is for general background sounds. It works on many levels. Both Ambarchi and Pinhas create this panorama of sound and noise using heavily effected guitars and loops, with drummer Joe Talia sitting in (Ambarchi drums on the live DVD), plus a second circle of guests including Masami Akita (a.k.a. Merzbow), Richard’s son Duncan Pinhas, and drummer Eric Borelva. Three long expansive tracks are featured on the 70+ minute CD – and don’t be misled by the track titles: “Washington DC – T4V1,” “Tokyo T4V2,” and “San Francisco – T2V2” were all recorded in Pinhas’ studio in Paris. The DVD contains a single 40+ minute performance by the duo, “Paris – Part One TNV0” recorded live, October 29, 2013 at Les Instants Chevires, Paris’ primary venue for experimental music. The added visual aspect is interesting to watch, especially after Ambarchi takes to the drum kit, although the videographers have taken the additional liberty of adding some excellent multiple-image effects to what is essentially a stationary performance under dark red lighting. On a strictly musical level, the live performance is every bit as engaging as the three cuts on the CD.