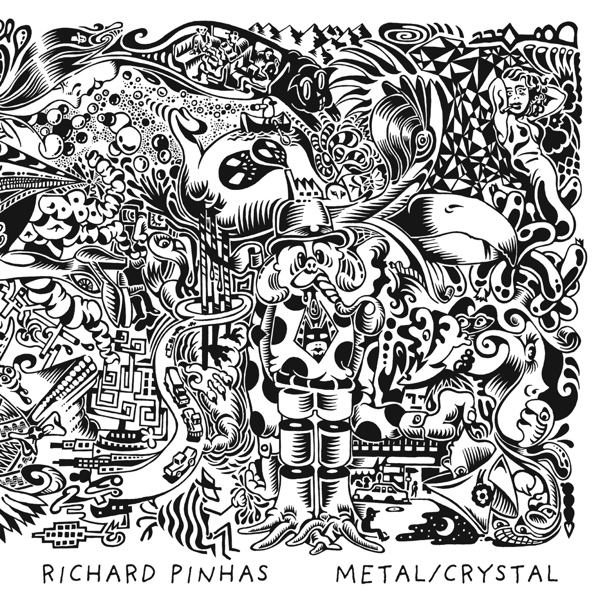 If it's true – at least in creative work – that quantity yields quality, the recent releases by Richard Pinhas are proving that maxim possesses a limited applicability. Built as a circle, the most recent of three consecutive overloaded 2-CD sets, Metal / Crystal is an old school freak-out. By far the most jammy, free form collection of looped / unlooped / collaged / trance / drone / noise art of the lot. Three of the tracks reach just over 28 minutes in length, and with the other three are populated by guitar, drums, synth and laptops that form an electric / electronic chamber ensemble unhinged by levels of density possible only on the digital frontier. Smooth as silk, safe as milk Frippertronics© style guitar darts from background to foreground, trilling and micro pitch shifting like it's 1973. All around a warehouse of schlagzeuge (batteries?) hammer through hazy, exhausting, even herculean patterns, bound together with some dance-floor Moogy synth bass and mashed up by saturating after effects that over take the original sources, twisting them into monstrous, opaque and brimming new tonal forms. Often abrasive, crackling and scratchy, wrapped in a warm analog fuzz, arcing into and out of sound fields, decomposing into collapsed timbres, snarky noise, feedback and drones only to loop around and clarify once again. It's bristling, old-timey e-music at its finest, shorn of the contemporary affectations and abstractions of Keio Line, thicker than Metatron, exiled to flourish in the buzzing, foggy and finely-detailed fens of an entropical paradise.