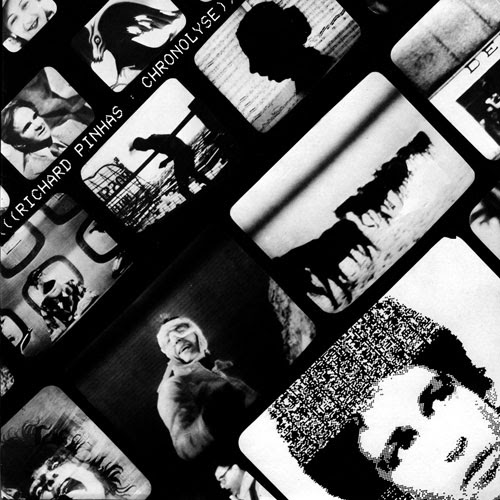 By this point in time in early 2016, saying that Richard Pinhas is an artist of many facets is a pretty obvious observation. Just glance through the reviews listed on his artist page, and you’ll find everything from space rock guitar to pure abstract electronics, with noise levels from ambient to intense and freaky. Chronolyse was originally released as his second solo album in 1978 (though it was recorded in the first half of 1976, before Rhizosphere, which came out in 1977), and features one LP side consisting of nine purely electronic tracks and the second side consisting of a 30 minute epic that is basically his band Heldon, with Didier Batard (bass) and François Auger (drums) joining his keyboards and guitar. Side A was all recorded live with just a Moog modular synthesizer and an extra tape recorder for delay effects, but given the result, you could be forgiven for thinking there are overdubs. For a comparison to a well-known sound, there are occasional similarities with “On the Run” on Dark Side of the Moon, with pulsing patterns varied in resonance, though Pinhas takes it a bit further and does it live in one pass. So it says – sometimes as I listen to it I’m not sure if that’s actually even possible. But no matter, it makes for an intriguing listen and a peek into the early middle days of electronic music, before digital instruments took over. Side B starts out very quietly, with the synthesizer providing some sound effects and pointillistic notes. Four minutes in or so, a tempo begins to develop with a synthesizer pulse, and around the six minute mark you become aware that a guitar has joined in – more than one in fact, with their parts weaving in and out of each other. Drums slip in a bit later, as do bass and Mellotron, and we wander into droning space rock territory. This track was first recorded as a lengthy synth-only piece in the same manner as Side A, then the musicians played along with the existing track. The result is epic, and an essential listen for fans of space rock. Science fiction fans in the audience will no doubt recognize that all of the titles refer to characters in Frank Herbert’s Dune (“Paul Atreïdes,” “Duncan Idaho,” “Bene Gesserit”), which was a great inspiration to Pinhas, though not especially relevant to the listener. Cuneiform released Chronolyse on CD in 1991, and in 2015 put out the first vinyl reissue as Rune 30LP – in either format, it’s one of Pinhas’ best.

I doubt there will be a day when I feel like I've completely absorbed all of the Heldon and Pinhas titles on my shelves — there are really so many good and interesting titles crossing a lot of different styles from rock to pure electronics. But of all of them, the one that stands out the most to me is the Dune-inspired second solo album under the Pinhas name. The primary reason why it does is the nearly 30-minute second side "Paul Atreides." This stormy masterpiece of guitars, Mellotron, electronics, bass, and percussion is like a bizarre cousin of mid 70s King Crimson if you took Bruford out of the equation and ran it all through Fripp and Eno tape experiments. Waves of effected guitars scream over noises, Mellotron strings, and bass notes, almost static from one perspective and ever-shifting from another. The other side took me a bit longer to appreciate with its shorter Moog synthesizer experiments, but the thick and cyclical sounds on display here are classic analog and sound better with every listen. In many ways Pinhas had a pretty distinct science fictional vision at display (here Frank Herbert, there PKD or Spinrad), and to this day this album hasn't really dated in the least.