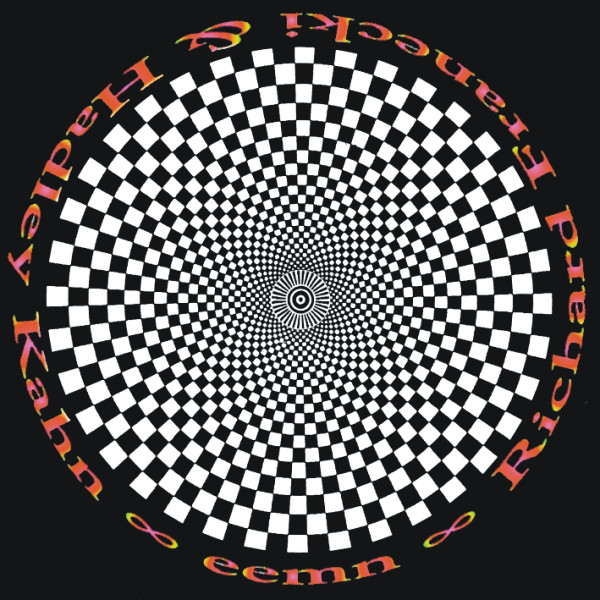 When guitarist / synthesist Richard Franecki (F/i & Vocokesh) and drummer Hadley Kahn (Escapade) get together to record a one-off, you know it’s going to be one wild and crazy ride. Both of these guys have had long tenures in bands that take experimentalism to the extreme and push the sonic envelope at every turn. It seems fitting that this gem of sonic abstractions and experimentations that enjoyed a brief release as a CDR way back in 2004 gets another lease on life in 2016 on the Auricle label, though again as a CDR. The nine tracks here vary widely from under one minute to nearly twelve. While Franecki is credited with bass, Buchla 200 synth, guitar, Arp Odyssey, samplers, pedals, and processing, and Kahn plays drums, some bass, Octave Cat synth, loops, and processing, these two guys make a lot of strange and mysterious sounds that bridge the worlds of psychedelic rock, sonic chaos, and noise, producing a very unique collection of sound sculptures that transcends much of what’s been done on these fronts in their respective bands. Strange voice samples haunt some of the pieces, often in sound collages that challenge the senses. It’s even harder to believe that this was a mail collaboration that evolved over a three year period, Kahn recording at Mother West studio in NY, and Franecki recording at the Purple Room in New Berlin, Wisconsin. Listening to this, one could almist swear that these two guys are in the same room recording, their heads filled with swirling psychedelic chemicals. This is a hard disc to describe, because it’s all over the map, but in general terms way out there beyond the norms and standards of conventional music, rock or otherwise. Some pieces eclipse others, but that all depends on what frame of mind the listener is in when absorbing the program as a whole. For all those who missed this one the first time around – like me – it’s back again, though stil this time as a very limited edition.