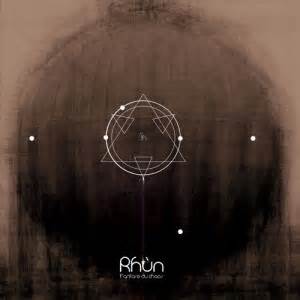 This is the full length debut by French six-piece plus guests Rhùn, which appears to be a self-titled three song demo from 2008 (tracks 4-6) combined with an EP called Ïh from 2012 (tracks 1-3). Instrumentation includes bass, drums, percussion, guitars, baritone, tenor and alto saxes, bassoon and flute, with almost all members supplying vocals; add to that a guest wind quartet of traverse flute and piccolo, oboe, clarinet and French horn, and you have a lot of cooks in this kitchen. The first thing the listener will note is the pervasive zeuhl influence – the heavy bass and rhythm and cyclical repetition, plus the chorused vocals in some mysterious language might at first remind a bit of Runaway Totem more so than Magma. But there’s a lot more going on here. The wind quartet on the first three cuts adds some beautiful neo-classical passages that add a gentler side to the chaotic rock and zeuhl elements, though they tend to fuse together nicely. There’s also a strong jazz-rock and free-jazz thread going on in their music, most evident on the earlier material, mixed in with somewhat bizarre experimental elements. Fanfare du Chaos is certainly an appropriate title for what’s presented here; after a half dozen spins, this still seems as alien to my ears as it did on the first. Still, this is fairly promising all around, and I look forward to hearing what Rhùn comes up with in the future.