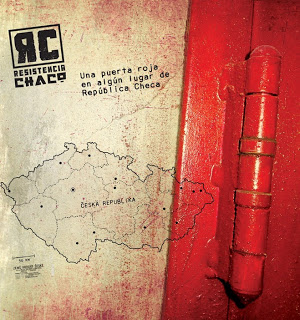 Images of a red door, a burned out building, a knife, cockroaches, and somewhere in the Czech Republic. It's not my Spanish language comprehension shortcomings that will prevent me from elaborating much further on the theme of the album's nine instrumental tracks. Resistencia is the capital city of the province of Chaco in northeastern Argentina, and presumably the home of this five-piece of guitar, bass, drums, tenor sax and baritone sax, who pack a mighty wallop of smoking hot avant-progressive. If you love noisy guitars with a crimsonesque twist, freewheeling bass and drum improvs, and, well you know what two wailing saxes can do together, then this may indeed be your ticket. If that description seems like something that would give you a headache, don't worry –it won't. Precisely the opposite. This is engaging, powerful and precisely executed instrumental rock that hits hard and steers clear of all popular metal clichés. It’s brutal and relentless, but leaves a listener ultimately satisfied. I am sometimes reminded of the Chilean band Exsimio, or the Japanese band Altered States, but that said, Resistencia Chaco steers clear of most of the math-rock compositional stylings of the former and the linear heaviness of the latter; instead this band is animated and nimble, constantly jumping between ideas and executing them with superior skill and precision. This one gets my highest recommendation.