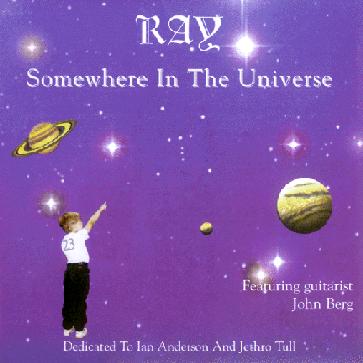 Ray is Ray Roehner on vocals, acoustic guitars, flute, and pennywhistle, John Berg on acoustic and electric guitars, and three other musicians on keys, bass, and percussion, with guests providing occasional saxes, violin, keys, bagpipes, and so on. Doesn't take a rocket scientist to figure out exactly who Ray's primary influences are: even before the CD starts to turn, there are numerous clues, from the front of the CD booklet that states "Dedicated to Ian Anderson and Jethro Tull," or the thank you credits on the back where Anderson and Martin Barre are mentioned by name, or song titles like "Tribute to JT," or the information regarding Jethro Tull newsletters and internet resources offered inside the booklet. These guys worship Tull! And the music indeed bears that out, they make no bones about it; specifically it's Tull's acoustic guitar based side evident in albums like Songs from the Wood and so on. Of the twelve original compositions here (two others, "Jackalynn" and "Broadford Bazaar," are actually Tull covers), most are in the two-to-four minute range, and though they won't win any awards for stylistic originality, they are likeable enough anyway, and should warm the hearts of Tull fans old and new alike.