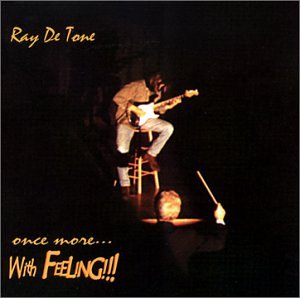 Although you may not know him by name, guitarist Ray de Tone has connections with a lot of artists in the mainstream music industry including the likes of Iron Maiden, Ronnie Spector, Billy Joel, Whitesnake, and Billy Squire. With twenty years of playing experience and 150 compositions behind him, Ray has produced his first album, filled with nine instrumental pieces and one track with vocals (by Ray). Most everything is performed by Ray, including keyboards and drum programming. Some friends help out with bass on a few tracks, but when necessary Ray does that as well. Musically, the album is not unlike many solo guitarists' offerings in the past decade, but perhaps none are better comparisons than Eric Johnson's Ah Via Musicom. De Tone has a similar style, which avoids throwing a million notes in your face but rather kicks back and relies on the melody and the groove to move you. The results vary wildly, and when it succeeds it still seems to be a shallow, toe-tapping, driving-with-the-top-down kind of success. The drum programming makes use of some great-sounding samples but it's still agonizingly cold and mechanical. Music of this nature simply requires the soul and fluidity of a real drummer to groove properly. This is one of those discs where you know what you're going to get, and is most likely to be of interest to die-hard fans of instrumental American guitar pop-rock.