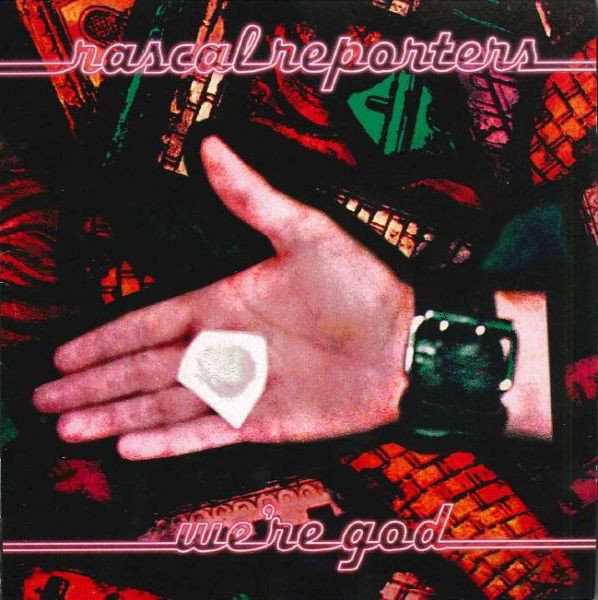 Listening to the 1980 album of Rascal Reporters after such a long time is a fascinating glimpse into the beginnings of a weird and (usually) wonderful musical world populated by exactly one band. There are certainly similarities to Residents on many of the tracks, and occasional flickers of other bands, but on the whole, the Reporters were on their own. While other groups around the world were taking multitrack home recording and synthesizers and inventing synth-pop, Steve Gore and Steve Kretzmer were forging their own path, producing monumentally unconventional music. Sound collages, Sondheim and Weill musicals, Canterbury prog, and 20th Century chamber music all get refracted through a lens of warped creativity and rendered on a variety of instruments. They say “Hello?” with a tune full of recorded telephone noises and off-kilter rhythms, left-field diversions, and strange noises. “After the Fun” is a short tune based around acoustic guitar with a difficult vocal melody a bit reminiscent of a Gentle Giant interlude. “Solomon Music” is a piano solo that is tuneful and quite lovely, with touches of dissonance and a wandering chordal structure. “One Nation under God” ventures into Residents territory, with warbly keyboards, steady marching-band percussion, and piano parts that seem to come from another piece entirely. “Fidget Stomp” almost sounds like a lost Hatfield and the North demo, and over more than nine minutes goes through Richard Sinclair type vocals, jazzy scat singing, kaleidoscopic march rhythms, manic interlocking melodic parts, a stately theme with strange chords, and weird sound effects. “Smidgens” is a six-part piece of absurdist musical theater, like “Three-Penny Opera” on acid performed by the inmates of a boarding school for the children of surrealists and clowns. This seemingly random collection of sentences describes only a portion of We’re God. This new remix restores the original sound of the 1980 cassette release, which was altered heavily for its 1997 CD version. There are also five bonus tracks, four of which are unreleased recordings from around the same time as the album sessions, with the remaining being the 1997 version of “Cannonball Adderly,” which eliminates a bit of the strangeness, though far from all. The other bonus tracks are all worthy of inclusion. For fans of the strange and offbeat, this reissue of We’re God is a surefire winner, and proof that Rascal Reporters had established their identity early on.