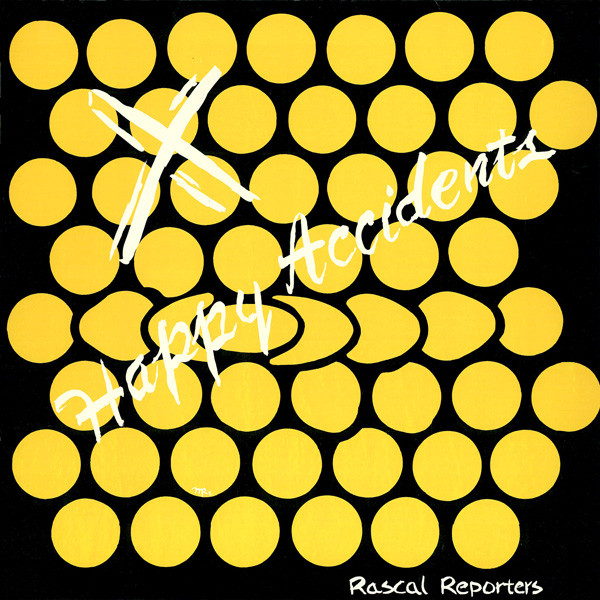 What do you get when you combine two one-man bands? Why, Rascal Reporters of course. Steve Gore and Steve Kretzmer are the men responsible for the music of this highly idiosyncratic American group. One listen to Happy Accidents and you are likely to come away stunned at the complexity they dish up on this 1988 production. Not only is there no improvisation, but each musician plays and composes only his own pieces. And a host of guests appear to flesh out the arrangements. There is a great bass contribution from Guy Segers, whom many will be familiar with. The most prominent guest though, is wind instrumentalist, Dave Newhouse, from the Muffins. Almost like a third member, he adds just the right sparkle of flute and saxophone.

"Weigh-In on the Way Out" is a three-part suite comprising what was side one of the LP. This composition never ceases to amaze me. Steve Gore treats the themes here in a number of ways, including very clever (if they were planned) little snippets of references to some rather well-known melodies. Some of the moments here capture the style and tone qualities of Egg's Polite Force album so deftly that you would swear it was recorded in 1971. Even the instruments seem ancient, just the way I prefer it. That must be a Farfisa organ they use. And boy can they play it! Jazz elements sneak in here and there as Gore takes us around the block in a whirlwind of styles. "Weigh-In" dances around with a gleeful madness that is charming, with an extraordinary sense of melody line. Parts of it almost remind me of a soundtrack to a 60s TV drama. Back when they really knew how to write 'em. Days later, and that theme is still bouncing through my head.

"Trucks" is Steve Kretzmer's contribution, another epic around the twenty minute mark, but it bears scant resemblance to his partner's work. On this side the music takes a darker twist, venturing into a dense forest of ideas. More emphasis is on the rhythmic aspect rather than melodic, so it is likely to require greater attention. Kretzmer's organ and synth playing boggles the mind with its sheer adroitness. It will surely keep any listener busy for a long time deciphering all the keen counterpoint with the bass.

This reissue contains over 30 minutes of bonus material from 1995, the bulk of which measures up to the standard set by what appeared on the LP version. You really can't go wrong with this CD — the apotheosis of what Rascal Reporters are all about. Highly recommended, as a great example of a very particular American twist on the experimental-progressive music genre.