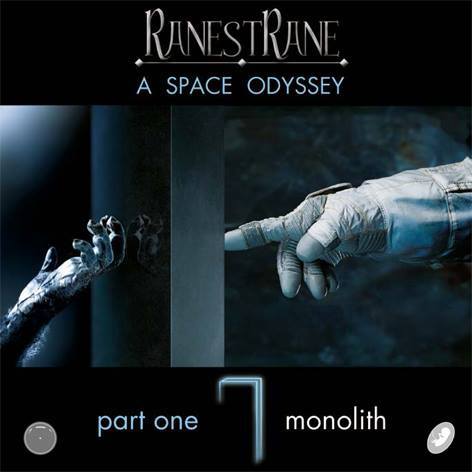 Here we have the first installment of RanestRane's "alternative soundtrack" to Kubrick's 2001: A Space Odyssey, covering the first two sections of the film ("The Dawn of Man" and "TMA-1"). I figured since the music is meant to accompany the film, I should experience it in that way, so I put on my DVD, muted its volumne, and watched while RanestRane played. Getting it synchronized was a problem, but I think I got it close enough to get the effect. The opening black screen features quiet shimmery sounds that gradually build to a breathy voice singing in English. The coordination of sounds with the sights on the screen is not precise — you don't hear a swell or change in the music at every cut or even scene change, but the overall flow makes sense. And when "TMA-1" starts and there's finally some dialog in the film, we actually hear some (but not all) of it on RanestRane's interpretation (how they worked this out from a copyright perspective is beyond me). There is more singing in this section, in Italian this time. The CD's music ends as the monolith is activated and the movie's second part ends. Stylistically, we're pretty firmly in symphonic progressive rock territory, with prominent keyboards and good melodies. Does it work outside the context of the movie? I'd say yes, though it's certainly better as a soundtrack than as a pure listening experience, especially if you haven't seen the film. (And if you haven't seen the film, we'll pause right now for you to go watch it with the original soundtrack, because everyone should know this landmark.) The main drawback to this release is that you only get part of the movie, and I can think of no reason why anyone would want to watch the first 55 minutes of 2001 and then walk away. Let's revisit the whole project when it's done.