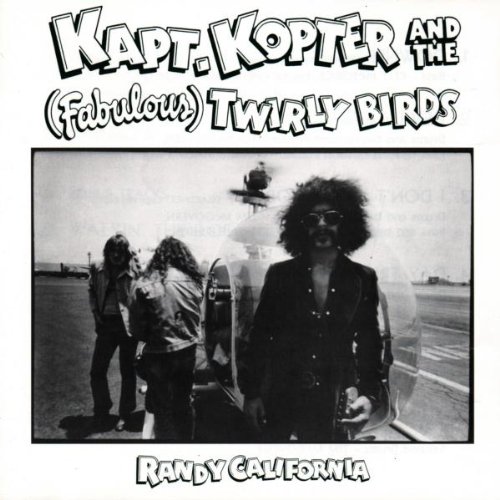 Although this may be slightly outside the realm of what's usually considered progressive, this will still be of interest to many fans of the genre, if only because of California's amazing guitar chops. While his style owes much to the feedback-laden psychedelic style of Hendrix (California was once the second guitarist in Hendrix' pre-Experience band), he also pioneered a unique sustain technique which was later used by the Guess Who, Steely Dan, and a number of other folks. This album was recorded during a period when his original band Spirit was in the process of falling apart (that's another story for another day), and this could, in essence, be considered the first album by the 'new' Spirit, which he continued to front, with step-dad Ed Cassidy, until his untimely death in 1997. The lineup varies from track to track: drummers include Cassidy and others, and much of the bass power is provided by the mystery-man "Clit McTorius" (actually Noel Redding of Hendrix' Experience, unable to use his real name for contractual reasons). The lineup on any given song is the basic three-piece guitar-bass-drums, with some occasional uncredited background vocals. The songs here are split between covers and original material. Two renditions of Lennon/McCartney tracks ("Day Tripper," "Rain") offer an entirely fresh perspective that was only hinted at in the original versions: everything is approached in good fun, nothing overpolished and technically perfected, which gives the album a free-wheeling sensibility. The original material is equally intriguing: "Devil" revels in simplicity yet contains some of the album's most impressive playing; "Downer" is a raw and powerful rocker that has stood the test of time. This is a most welcome reissue; This newest reissue is rounded out with three excellent bonus tracks.

Jannick Top - Infernal Machina – Jannick Top will be known to most readers as one of the most bad-assed, brutal, and intense bass players alive, and a major creative force within Magma at two different points during the 1970s. He,...  (2009) » Read more