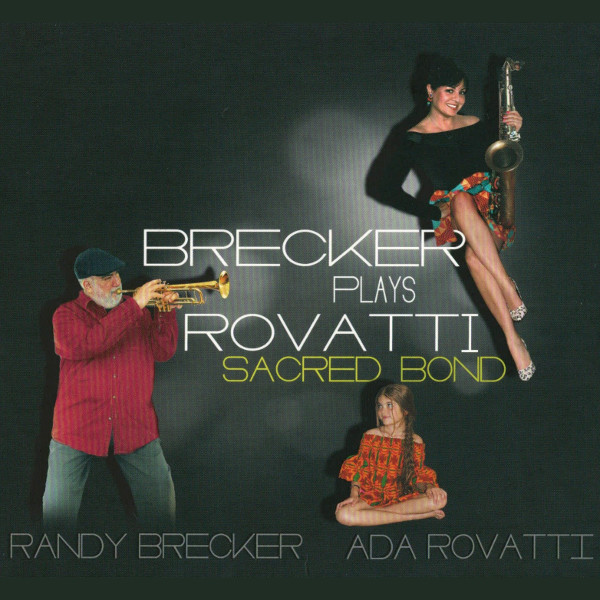 Now well into his 70s, trumpeter Randy Brecker shows no signs of slowing down, with several notable releases to his credit in the last few years. Sacred Bond finds him teaming up with his saxophonist wife Ada Rovatti to tackle ten of her compositions. They are supported by a band consisting of Alexander Claffy (acoustic and electric bass), Rodney Holmes (drums), Adam Rogers (guitar), Jim Beard (keyboards, organ), Edson da Silva Cafe (percussion), and David Kikosky (electric piano). With the electric piano featured so prominently, there is often a vibe reminiscent of late 60s or 70s jazz, and for the most part, the compositions don’t venture out of what might have come out of that time period. Trumpet and sax have the bulk of the lead lines, either individually, in unison, or in nicely done voicings. While many of the tunes lean close enough towards the mainstream and even smoothness that I find them tedious, there are several standouts. “Bitches Blue” is a nice nod to the early days of Miles Davis’ electric period, and catches the mood to a certain degree — it’s also the only track where Kikosky’s electric piano ventures out of a slick bland tone and acquires a bit of edge — though it seems very watered down compared to the dark energy of the original. The tracks where Rogers appears on guitar get a boost in energy, and he gets in some stellar solos. Brecker’s playing is up to its usual high standard, and Rovatti acquits herself well on tenor (though I find her soprano work too sweet). Sacred Bond is a skillfully made mainstream jazz album, and as long as you’re not looking for the fire of Brecker’s work with Eleventh House or the Brecker Brothers Band, it shouldn’t disappoint.

Alpha Wave Movement - The Mystic and the Machine – A one man band sounding for all the world like a power trio from the mid 70s, Greg Kyryluk, joined on four tracks by Steve Hillman (not Hillage) on guitar, has hobbied through a convincingly nostalgic...  (2008) » Read more

Alex, Sittin' on the Couch with His Hand