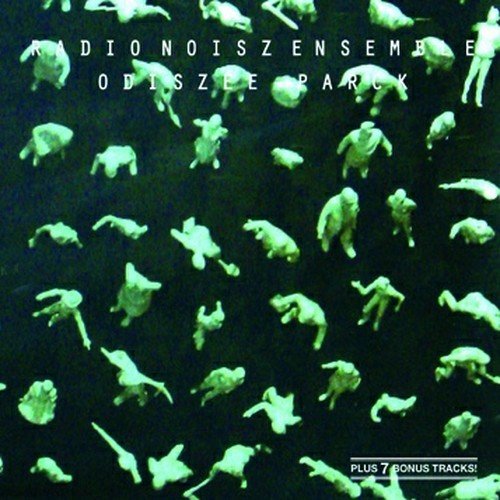 Radio Noisz Ensemble was the successor band to the more folk-oriented six-piece Emma Myldenberger, who released two LPs in the late 1970s, and followed those with a live cassette after the turn of the decade (all since released on CD). Three members (guitarist / mandolinist Michel Meyer, reeds player Biber Gullatz, and Topsi Tkacz on violin and contrabass) of Emma Myldenberger formed RNE in ’81, who along with percussionist Matthias Gassert and special guest Mani Neumeier (Guru Guru), recorded the band’s first LP Yniverze in 1982. Gassert was replaced by Sigi Siegler on this, the band’s second recording, which in its original incarnation was only released as a cassette. Here, in its CD debut, it appears with seven bonus tracks as a full 77 minute disc. Odiszée-Parck is a bit more free sounding than its predecessor, incorporating elements of jazz, classical, world-music, and free improvisation (especially on the truly out-there “Why Art We So Hungry?”, the album’s only vocal piece) into one cosmic whole. The first bonus track “Green Bananas” encompasses all of the band’s best tendencies, and is perhaps their finest moment. Remaining bonus tracks are mostly live versions, including reworkings of some pieces originally recorded with Emma Myldenberger. The more prevalent use of tabla as opposed to a full drum kit, double-reeds, violin, and Chinese and Arabic flutes goes far to take their instrumental profile into a more world-music direction, while the constructs remain more in the jazz and classical idioms, with a touch of avant-garde experimentation. The astute listener might at times be reminded of contemporaries Between or Oriental Wind, early Third Ear Band, Do’a circa Ornament of Hope, or the music that Embryo was evolving toward in the early 1980s. Even though RNE continued working together until 1986, Odiszée-Parck would be their final recording, an outstanding release all around.